The two autonomous driving leaders working to usher in a new era of vehicle safety, and help achieve the next level of ADAS features

SEOUL, South Korea, Dec. 17, 2021 /PRNewswire/ — StradVision, a pioneer in AI-based vision processing technology for Autonomous Vehicles and ADAS systems, announced that it has teamed up with LG Electronics to develop the most advanced cockpit instrument platform, based on augmented reality solutions for the global automotive industry. 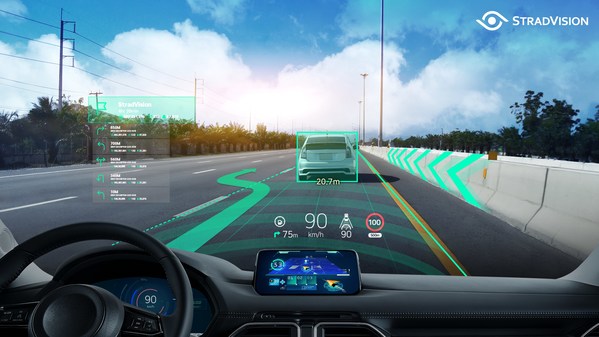 StradVision’s SVNet delivers Depth Map, Semantic Segmentation, and other key features for the implementation of AR-HUD

"LG Electronics is a strategic partner of StradVision, and we have long been cooperating in the development of the most advanced ADAS technology including the advanced development of LG Electronics’ DNN-based next-generation augmented reality solution. We look forward to further expanding our collaboration with LG Electronics to develop cutting-edge technologies for a safer road environment and discover new business opportunities," said Junhwan Kim, StradVision CEO.

Automakers are paying more attention to the advantages of augmented reality solutions, Augmented Reality Head-Up Displays (AR-HUD) in particular, and are looking to adopt this technology across wide vehicle lineups. This next-generation technology projects important road information such as navigation and various ADAS warnings into the line of sight of drivers, allowing them to keep their eyes on the road while also perceiving the surroundings accurately through real-time interaction with the objects in their path.

StradVision’s technology for augmented reality application, delivered by its camera perception software SVNet, is focused on improving visuals for head-up displays or center screens of automobiles. The software provides the most enhanced vision perception features, including:

SVNet is a lightweight software that allows vehicles to detect and identify objects accurately, such as other vehicles, lanes, pedestrians, animals, free space, traffic signs, and lights, even in harsh weather conditions or poor lighting.

The software relies on deep learning-based perception algorithms, which compared with its competitors is more compact and requires dramatically less memory and electricity to run. SVNet supports more than 14 hardware platforms and can also be customized and optimized for any other hardware system thanks to StradVision’s patented and cutting-edge Deep Neural Network-enabled technology.

SVNet is currently used in mass production models of ADAS and autonomous driving vehicles that support safety function Levels 2 to 4.

Founded in 2014, StradVision is an automotive industry pioneer in AI-based vision processing technology for Advanced Driver Assistance Systems (ADAS). The company is accelerating the advent of fully autonomous vehicles by making ADAS features available at a fraction of the market cost compared with competitors. StradVision’s SVNet is being deployed on various vehicle models in partnership with OEMs and powers ADAS & Autonomous Vehicles worldwide and is serviced by over 200 employees in Seoul, San Jose, Detroit, Tokyo, Shanghai, and Munich. StradVision has been honored with the Gold Award at the 2021 AutoSens Awards for Best-in-Class Software for Perception Systems, and the 2020 Autonomous Vehicle Technology ACES Award in Autonomy (Software Category). In addition, StradVision’s software is certified to the ISO 9001:2015 international standard.