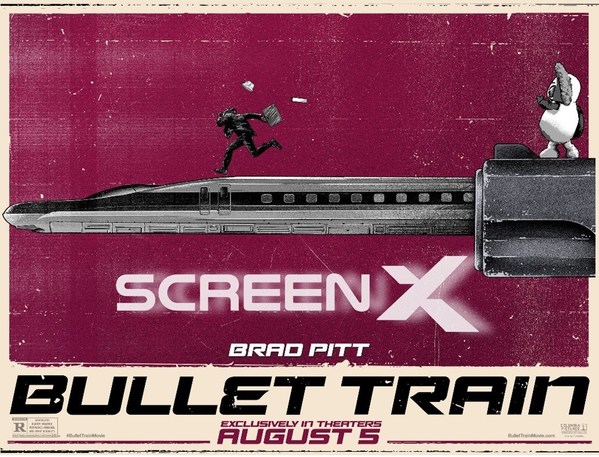 ScreenX surrounds and transports moviegoers into the riveting action of the film by expanding specially selected film sequences onto the left and right-side walls of the auditorium. CJ 4DPLEX worked closely with Sony Pictures and David Leitch to ensure the highest quality presentation of the exhilarating journey and guarantees an immersive, 270-degree panoramic viewing experience that can’t be replicated anywhere else. "Bullet Train" will be available on over 382 screens worldwide and over 75 screens at Regal Cinemas, Cineplex, B&B Theatres, Cinepolis and CGV Cinemas across North America.

4DX transcends the traditional moviegoing experience by submerging audiences into CJ 4DPLEX’s innovative theater technology that enhances on-screen visuals with over 21 unique motion and environmental effects. "Bullet Train" will be on over 783 4DX screens worldwide and over 57 screens in North America with Regal Cinemas, Cineplex, Cinepolis, Marcus Theatres and CGV Cinemas.

"From beginning to end, ‘Bullet Train’ will take audiences on a thrilling ride and we’re excited moviegoers will witness this in our one-of-a-kind premium formats," said Jongryul Kim, CEO, CJ 4DPLEX. "Thank you Sony Pictures and David Leitch for your close collaboration and unique input to make ‘Bullet Train’ an unforgettable experience in both ScreenX and 4DX."

Don Savant, CEO & President, CJ 4DPLEX America stated, "We can’t wait for everyone to jump on the ‘Bullet Train’ and experience the ride of a lifetime in ScreenX and 4DX. David Leitch’s action-packed comedy thriller is the summer blockbuster you will not want to miss."

"Bullet Train" tickets are on sale now and can be purchased at your local ScreenX and 4DX theaters.

In Bullet Train, Brad Pitt stars as Ladybug, an unlucky assassin determined to do his job peacefully after one too many gigs gone off the rails. Fate, however, may have other plans, as Ladybug’s latest mission puts him on a collision course with lethal adversaries from around the globe—all with connected, yet conflicting, objectives—on the world’s fastest train. The end of the line is just the beginning in this non-stop thrill-ride through modern-day Japan from David Leitch, the director of Deadpool 2.

CJ 4DPLEX is a leading, next-generation cinema technology company, headquartered in Seoul with international offices in Los Angeles and Beijing. The company has created innovative film technologies for theaters worldwide that include ‘ScreenX’, ‘4DX’, and ‘4DX Screen’ for consumers to experience films in ways that were never before possible.

CJ 4DPLEX is a part of the CJ Group conglomerate that also includes entertainment powerhouses CJ CGV, the fifth largest theater chain in the world, and CJ ENM (CJ Entertainment & Media), who produced the Academy Award®, Golden Globe® and SAG Awards winning film, "Parasite". CJ 4DPLEX was named Most Innovative Company of 2017 and 2019 in Live Events by Fast Company, and the technology has been recognized with Silver at the Edison Awards in the Media and Visual Communications-Entertainment category in 2015 and 2018.

ScreenX is the world’s first multi-projection cinema with an immersive 270 degree field of view. By expanding the image beyond the frame and onto the walls of the theatre, ScreenX draws you into the story on the main screen and immerses you in a virtual reality like setting with cinema quality resolution. To date, there are over 382 ScreenX auditoriums around the world in 38 countries.

4DX provides moviegoers with a multi-sensory cinema-going experience, allowing audiences to connect with movies through motion, vibration, water, wind, snow, lightning, scents, and other special effects that enhance the visuals on-screen. Each 4DX auditorium incorporates motion-based seating synchronized with more than 21 different effects and optimized by a team of skilled editors. To date, there are over 783 4DX auditoriums around the world, spanning over 69 countries.

4DXScreen is a powerful combination of our super premium immersive theatre technologies of ScreenX and 4DX in one auditorium, creating a never-before-seen experience for cinemagoers. To date, there are 41 4DXScreens installed around the globe.