ISLAMABAD, Feb. 23, 2021 /PRNewswire/ — SnackVideo, a popular short video platform in Pakistan, has recently announced two exclusive sponsorship deals with leading sports teams in Pakistan. Islamabad United, a leading cricket team, is set to endorse SnackVideo as partners for the PSL VI. Multan Sultans, a well-known Pakistani cricket team, and its players will also endorse the app to millions of fans around the country. 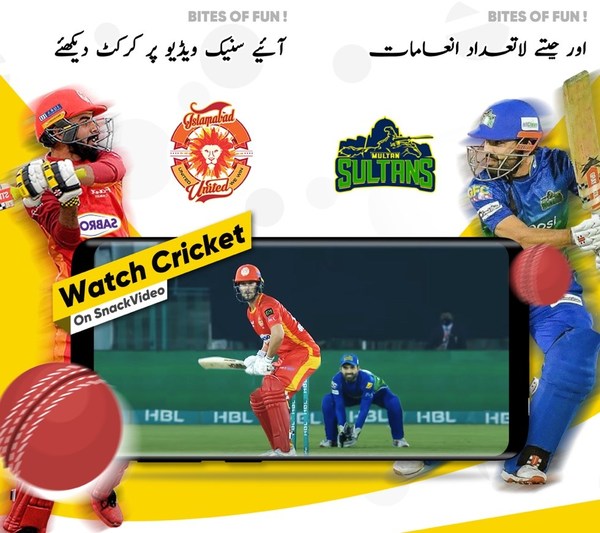 ‘Islamabad United is proud to align ourselves with a rising platform such as SnackVideo,’ says Shadab Khan, captain of the team. ‘SnackVideo aims to give a voice to every person so that they can express themselves, which is what our team have done for our fans in the league.’ Fans of both teams are not going to leave empty-handed as well. As part of the exclusive sponsorship agreement, fans will enjoy the chance to win signed team merchandise via SnackVideo.

The exclusive sponsorship with sporting teams has brought SnackVideo to the national spotlight. With slots across print, television and radio, SnackVideo will reach mainstream audiences and share with them the values and joys of expressing themselves via technology.

Mohammad Rizwan, captain of Multan Sultans said, ‘Partners like SnackVideo form an essential part of the sporting scene here in Pakistan, and we are happy to support partners who invest and develop our business and sporting industries together.’

SnackVideo is the party for short videos!

SnackVideo offers a variety of the most exciting, funny, magic videos and live-streams. Enjoy various types of interesting content from comedy and fashion to pets and gaming – and everything in between. Simply watch and engage with what you like.

SnackVideo aims at inspiring and encouraging users to express their styles and creativity to the world. This application is easy to use and allows users to create their original videos. The effects, filters, music and more will help users get as creative as they like.

Each user can upload his or her original videos, or other people’s videos, and add other video creators to their friends list.

SnackVideo is now available in Android and iOS. Don’t hold back and start experimenting with the videos you’ve always wanted to try with SnackVideo!

The First Performance Art NFT Exhibition Of EchoX, A Million-dollar Vision On Its Debut, Overturns The Game