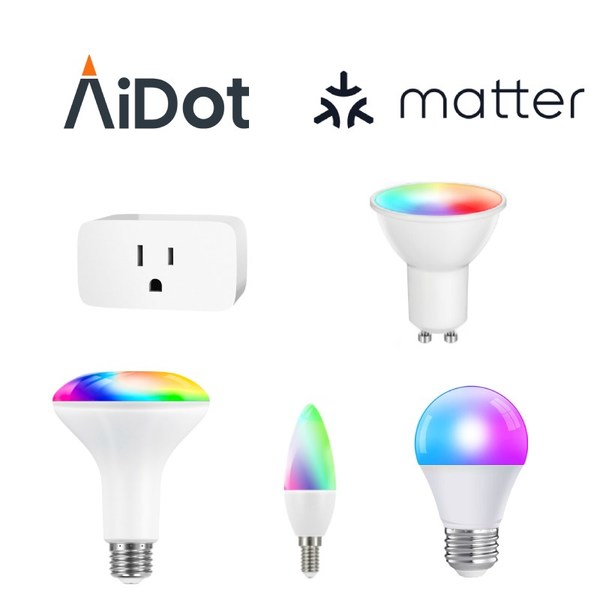 OREiN, MuJoy, and Linkind, brands joined the AiDot smart home ecosystem, announced that they have some products now compatible with the Matter, and Matter-certified from CSA. Products announced include the smart light bulb models A19, BR30, A60, Candle, and a Smart Plug. All those products will be Matter ready when launched to the Market in the future.

The goal of the Matter standard is to make all smart home devices interoperable. This means that Matter-compatible products can be used with Amazon Alexa, Apple Home, Google Home, Samsung SmartThings, or any other standard-compliant ecosystem.

Music Rhythm and Immersive Entertainment modules are now launched for the connected smart lighting products in the AiDot APP. Consumers can join multiple smart light products to make the entire space scene flicker and beat with the tune and sound so that the light effect is fully synchronized with the local music dynamic, and meet the demand for creating the ultimate music atmosphere. The Music Rhythm module of AiDot App has 14 different light effects Rhythm Themes prepared for those using.

MuJoy has 2 Matter over thread products are Matter-compatible and have got the Matter certification. MuJoy will launch Smart Bulb A19 RGBTW and a Smart Plug for the US region

Linkind has 2 Matter over Wi-Fi products are compatible with Matter, and Matter-certified. Linkind will launch products in the United States including Smart Bulb A19 RGBTW and Smart Bulb BR30 RGBTW.

These 8 smart light bulbs and 1 Smart plug are the first waves Matter-Certified products in the AiDot smart home ecosystem, which will be launched in the fourth quarter of 2022 or the first quarter of 2023 respectively. In the future, AiDot will continue to achieve a long-term vision of fully embracing the Matter standards by supporting the products of smart home brands in the ecosystem to obtain the Matter certification.

AiDot is a smart home platform that connects devices across brands and ecosystems. With AiDot, your home becomes a connected space that makes your life simpler, safer, and more entertaining.

The AiDot app is the central part of the platform for controlling all smart home devices installed in your home. No matter where you are, you can control "Works with AiDot" devices in your home, including lights, switches, outlets, cameras, sensors and household appliances, or create scenes and automation around your routines.

"Works with AiDot" (WWA) is a mark of interconnectivity across different brands and categories. You can easily control any product featuring the WWA label with AiDot app. Brands that have joined the AiDot ecosystem include well-known smart device brands, such as Linkind, OREiN, MuJoy, Winees, WELOV, Syvio, GoGonova, Ganiza, etc.