LOS ANGELES, Nov. 19, 2021 /PRNewswire/ — After a highly momentous global launch, Netmarble is thrilled to share that Seven Knights 2, the sequel to the long running mobile roleplaying game Seven Knights, can now be enjoyed by even more players as the game is now available on Windows PC through Netmarble’s official site. 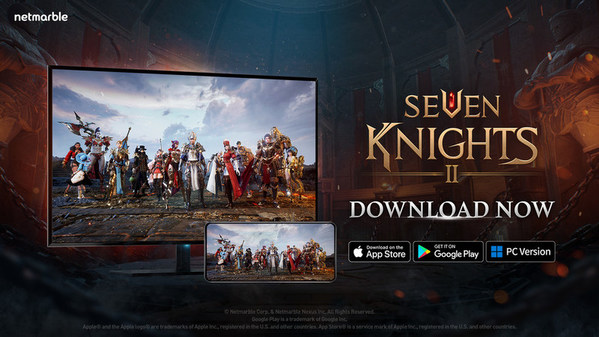 The PC version of Seven Knights 2 allows for cross-platform play between PC and Mobile, which allows players to enjoy the game in different environments to fully experience all that Seven Knights 2 has to offer – strategic combat, iconic heroes, immersive storyline, to name a few. To access the Windows PC version, players will need to create a Seven Knights 2 account on mobile, then connect to the PC version. For instructions and further details, players can check out the site here: 7k2.netmarble.com/pcclient

Minimum and recommended specs are below:

Seven Knights 2 takes place 20 years after the original Seven Knights, and centers on the Daybreak Mercenaries who embark on a journey to find the last member of the Seven Knights "Rudy," after a series of events involving a mysterious girl named Phiné. Starring an array of characters depicted with stunning graphics powered by Unreal Engine 4, Seven Knights 2 will immerse players in a true sequel featuring the fun and innovative gameplay of Seven Knights enjoyed by players around the world. Collect and develop charismatic heroes while engaging in a deep and immersive cinematic story.

About Netmarble Corporation
Established in Korea in 2000, Netmarble Corporation is a top developer and publisher pushing the boundaries of the mobile gaming experience with highly innovative games including MARVEL Future Revolution, Ni no Kuni: Cross Worlds, Lineage 2: Revolution, The Seven Deadly Sins: Grand Cross, Blade & Soul Revolution, and MARVEL Future Fight. As a parent company of Kabam, and a major shareholder of Jam City and HYBE (formerly Big Hit Entertainment), Netmarble strives to entertain audiences around the world with a variety of mobile games based on its powerful franchises and collaborations with IP holders worldwide. More information can be found at http://company.netmarble.com.