FRANKFURT, Germany, Oct. 6, 2020 /PRNewswire/ — The new World Robotics 2020 Industrial Robots report presented by the International Federation of Robotics (IFR) shows a record of 2.7 million industrial robots operating in factories around the world – an increase of 12%. Sales of new robots remain on a high level with 373,000 units shipped globally in 2019. This is 12% less compared to 2018, but still the 3rd highest sales volume ever recorded. 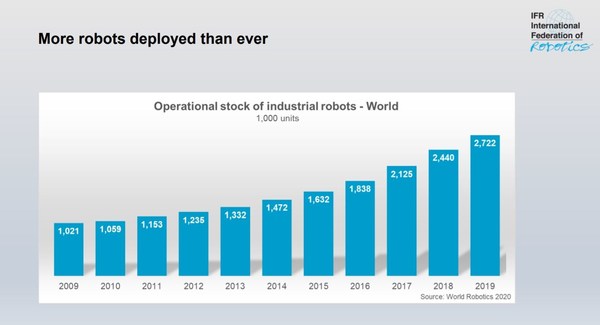 A record of 2.7 million industrial robots operating in factories around the world

“The stock of industrial robots operating in factories around the world today marks the highest level in history,” says Milton Guerry, President of the International Federation of Robotics. “Driven by the success story of smart production and automation this is a worldwide increase of about 85% within five years (2014-2019). The recent slowdown in sales by 12% reflects the difficult times the two main customer industries, automotive and electrical/electronics, have experienced.”

Asia, Europe and the Americas – overview

Asia remains the strongest market for industrial robots – operational stock for the region´s largest adopter China rose by 21% and reached about 783,000 units in 2019. Japan ranks second with about 355,000 units – plus 12 %. A runner-up is India with a new record of about 26,300 units – plus 15%. Within five years, India has doubled the number of industrial robots operating in the country´s factories.