SHENZHEN, China, Jan. 21, 2021 /PRNewswire/ — 2021–2020 was a year to remember for realme as it scooped up awards and international fame for its quality products and business milestones. realme’s success in 2020 showcased real strength in all areas as it not only navigated 2020, but expanded against industry expectations. 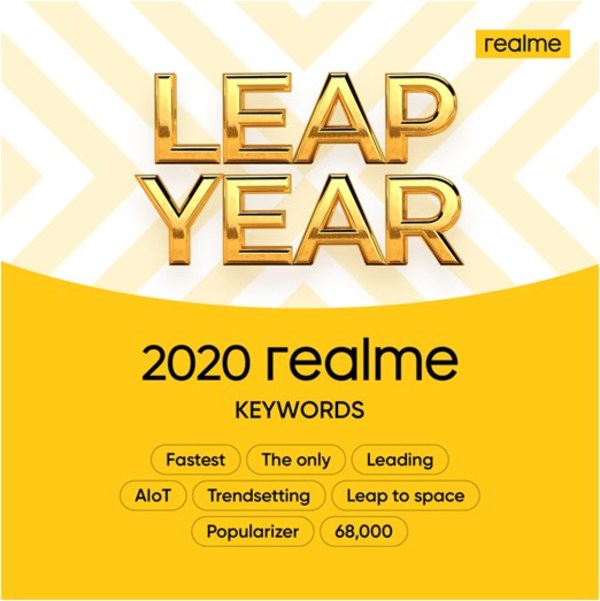 Much of realme’s commercial, corporate and innovative success is attributed to a clear and precise vision to provide cutting-edge technology and trendsetting design altogether in one package, and more importantly, the affiliation of the company to its target consumers, global youths between the ages of 18 to 25, by sharing the same brand values as them. Underpinned by strong support, realme has gained 17 brand awards, 159 product awards and 5 top tier design awards around the world in 2020.

At a global level, the youthful team led by founder and CEO Sky Li has lived out its values, and evidently so as the median age of the employees is only 29 years old. This has enabled the team to claim Brand of the Year across the world in Indonesia, India, Egypt, Poland and Pakistan awarded by notable organizations and media in these countries. realme has also achieved Top 5 in market share in 12 countries, and has expanded to 61 markets globally. These milestones reflect reports and features by notable media and research organizations. Counterpoint Research has hailed realme to be the ‘fastest-growing smartphone brand in the world’ and the esteemed Financial Times have affirmed that the company commands a leading position across Asia Pacific.

One major milestone has in 2020 has been one for the history books, as realme officially became the fastest company to reach 50M shipments, according to Counterpoint Research. realme, whose slogan is ‘Dare to Leap’, adopts a strategy of selling leapfrog performance and trendsetting design-driven quality products that resonate with its young crowd at an affordable and attractive price points. "At realme, we live out our philosophy, which is to dare to leap into the forefront of innovation, design and product value, which is something young people can identify with,’ says Sky Li, realme’s CEO. realme’s trendsetting image and product reputation has contributed to building customer trust and brand awareness, making this achievement not just a one-off anomaly but rather something we can come to expect of the young company.

realme’s products have gained acclaim from India to Poland to Egypt. With over 160 awards for its products globally, one of realme’s cornerstones is to focus on product development and attune it to consumer desires and demands. This is evident as realme has won more than 17 awards given by youths in 3 different continents, clearly showing that realme is the first choice as rated by youths globally.

realme’s achievements have also been pleasing to the eye, and this has not gone unnoticed by the international design community. Though young, realme has won five top international design awards such as the Good Design Award 2020 for three different products, the Red Dot Design Award for the realme X2 Pro, the Golden Pin Award and more. World class design is augmented by cutting-edge technology as realme was also the first brand to introduce 5G technology to many markets within competitive price ranges, such as a global launch of the realme 7 5G, which costs less than US$300. Well-known mobile authority GSM Arena has rated realme the first midrange all-rounder mobile phone for 2020.

This strategy and market leadership is heartily affirmed the company’s consumers: In?India, realme sold over 1?million?smart individual audio devices, reaching third?spot in market share in Q2 2020 as a new entrant. With such strong momentum gained in 2020, realme is poised to leap into 2021 even stronger and faster as a rising new force, disrupting the industry.

realme is a technology brand that brings trendsetting smartphones and AIoT products to the global market. realme users are young and globally-minded. They ‘Dare to Leap’, empowered by the latest in technology and design.

realme is recognized as one of the mainstream smartphone brands according to Counterpoint’s statistics of global smartphone shipments in Q3 2020, which ranks it at 7th in the world. In 2019, realme’s global smartphone shipments reached 25 million with a YoY growth rate of 808%, making realme the fastest-growing smartphone brand in the world for four consecutive quarters from Q3 2019 to Q2 2020. realme has entered 61 markets worldwide, including China, Southeast Asia, South Asia, Europe, Russia, Australia, Middle East, Africa with a global user base of over 50 million.