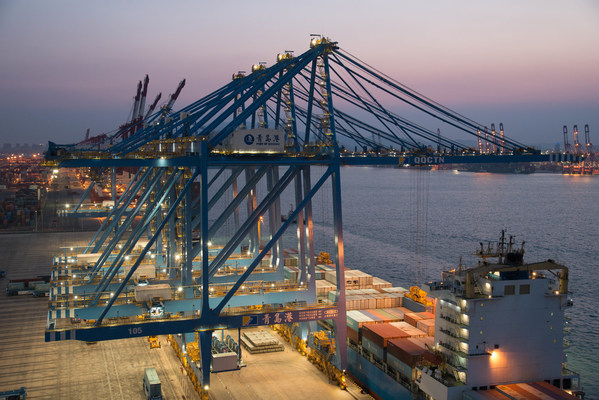 As the traffic volume continues to increase, the port’s carrying capacity limitations has become a bottleneck that limits further development. It quickly became evident that deploying a 3D intelligent, green and low-carbon transportation system is the way of the future.

Shandong Port Group senior expert Zhang Liangang and Qingdao New Qianwan Container Terminal general manager Li Yongcui took turns in explaining that Qingdao Port is now one of the world’s leading automated container terminals equipped with state-of-the-art technologies, a high degree of automation and high loading and offloading efficiency. It is also the first fully automated container terminal in Asia. The port has achieved productivity of 36.2 containers per ship per hour on average, peaking at 52.76 containers per hour, a production efficiency that is 50% higher than other ports with similar automated terminals. As one of the world’s largest automated terminals, Qingdao Port can accommodate 24,000TEU container ships with an annual throughput of 5.2 million TEUs.

On June 30, 2021, the world’s first intelligent overhead container delivery system (in a pilot phase) was put into operation at the automated terminal. The system was co-developed by a team of Qingdao Port engineers working under Mr. Zhang and the R&D team at CRRC Yangtze, with the goal of integrating the leading suspension transport technologies into the port’s operations to resolve that most difficult "last mile", so as to maximize efficiencies when it comes to delivering containers between the terminal, ships, transfer stations and stockyards, and meet the requirements for low cost, short loading/unloading cycles, greater efficiency, full automation, higher safety and zero emissions.

With a commitment to being an environmentally-friendly and low-carbon hub, Qingdao Port, the world’s first "hydrogen + 5G" smart ecological terminal, has pioneered the hydrogen-powered crane technology and system by developing a hydrogen energy-driven solution for the fueling of equipment needed for the operation of a large port. The system reduces carbon emissions by some 3.5kg and sulfur dioxide emissions by 0.11kg per TEU. Calculated on the basis of an annual capacity of 3 million TEUs, 21,000 tons of carbon dioxide and 640 tons of sulfur dioxide emissions are estimated to be cut annually.