TOKYO, Feb. 21, 2022 /PRNewswire/ — It was reported that the Ethanim metaverse infrastructure launch was concluded in Tokyo on February 8. Professor Hiroyuki Morikawa at the Graduate School of Engineering, University of Tokyo and former vice president of the Electronic Information and Communication Society, attending the launch as a key guest and giving a speech. This conference was the first official appearance of Ethanim, and the different views of the speakers make conference colorful. 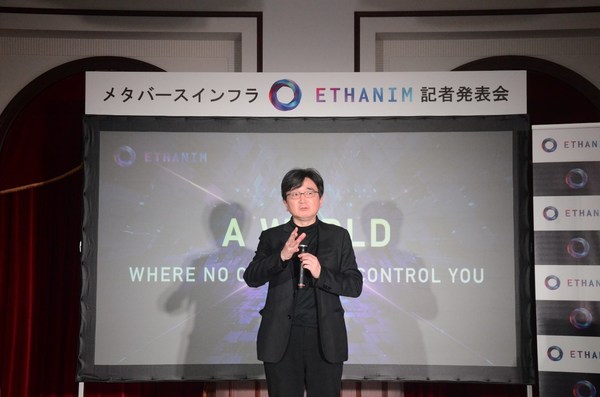 "New technologies will have an impact on society, just like the invention of washing machine changes the concept of hygiene, and the market for clothing has expanded a lot. No one could have predicted such a market change before that." Professor Hiroyuki Morikawa said, "Technology is currently being centralized and decentralized repeatedly, and with the arrival of a huge decentralization trend, many people participating and thinking about it will build a very beautiful ecosystem."

According to the viewpoint of Professor Hiroyuki Morikawa, it is clear that new decentralized technologies will bring new impacts to society, while potentially leading to unexpected development opportunities. As a new industry on the rise, Ethanim, with the underlying infrastructure as its entry point, will bring new dynamics to the industry.

Through the launch, the reporter learned that what Ethanim is trying to solve is the architectural limitations of current metaverse applications based on blockchain. Only the application Token, NFT or part of the simple business logic can be written as a smart contract on the chain, while the application itself and most of the logic calculation is still on the centralized server. Ethanim aims to prevent the digital assets being manipulated by the centralized program.

On the one hand, Ethanim creatively modularizes edge computing, virtual GPU, decentralized storage and other technologies to make the system expand infinitely horizontally and support the complete on-chaining of metaverse applications; on the other hand, Ethanim adopts the original RSM trusted state validation mode to place the nodes of chained applications in the trustworthy constraint. It regulates and monitors the code integrity and running state of the application, and keeps the backup files to ensure that the application is "safe and trustworthy while running and can be recovered by anyone after closing". This prevents centralized institutions or individuals from shutting down the application, modifying the application rules at will, or even threatening the security and value of digital assets on the chain. So that the virtual world of the metaverse application is real and trustworthy, and lives an eternal life.