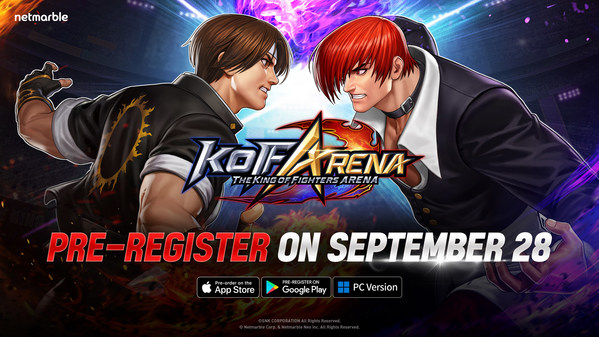 Various Rewards will be available at launch for a limited time including the Fighter Illust Collection and Fighter Background Collection to adorn and represent your fighter, a Limited version of Special Title and Title Panel.

The pre-registration website offers a deeper look into THE KING OF FIGHTERS ARENA gameplay and each fighter’s skills in battle with ‘Fighter Introductory Clips.’ Clips of all 37 fighters in the game will be posted in the weeks leading up to launch, and all fighters will be free to play, so players can keep up to see which fighter they’ll choose to become a champion. The update Road Map also shares how the game will expand, as players can expect the KING OF FIGHTERS ARENA roster and experience to grow through special collaborations and events.

In addition, THE KING OF FIGHTERS ARENA will feature Blockchain integration. Fans can visit the pre-registration website to review the White paper for THE KING OF FIGHTERS ARENA blockchain economy, including details on the FCT token, the game’s economics and NFT information. Players will be able to gain Fight Money (FM), the in-game currency, by equipping the Controller in fights. FM can then be swapped with the Fighters’ Club Token (FCT) for further blockchain transactions. Various ‘Fighters Cards’ will also be available through the game’s NFT market.

THE KING OF FIGHTERS ARENA will be available on Google Play, App Store as well as a PC version. Players will experience fast paced PVP battles across the globe in optimized environments provided by Netmarble’s stable management.The title will support English, Traditional Chinese, Indonesian, Thai, Spanish, Italian, French, Portuguese, Russian, German and many other languages.

Established in Korea in 2000, Netmarble Corporation is a top developer and publisher pushing the boundaries of the mobile gaming experience with highly innovative games including Seven Knights 2, Ni no Kuni: Cross Worlds, MARVEL Future Revolution, Lineage 2: Revolution, The Seven Deadly Sins: Grand Cross, Blade & Soul Revolution and MARVEL Future Fight. As a parent company of Kabam and SpinX Games, and a major shareholder of Jam City and HYBE (formerly Big Hit Entertainment), Netmarble strives to entertain audiences around the world with a variety of mobile games based on its powerful franchises and collaborations with IP holders worldwide. More information can be found at http://company.netmarble.com