Blockchain game service platform PlayDapp (CEO Brian Choi) announced on the 13th that it will open pre-registration for the blockchain game, mobile RPG ‘Along with the Gods: Knights of the Dawn, for the launch of its new Play-to-Earn (P2E) server.

P2E games are an emerging industry of games with an innovative business model that allows players to earn profits in various ways through gameplay using blockchain technology.

PlayDapp will launch a dedicated P2E server for ‘Along with the Gods’ in 170 countries around the world, and introduce a P2E game service integrating all the benefits of the PlayDapp ecosystem.

When the Along with the Gods P2E server launches, players will be able to earn up to 5 PLA (PlayDapp’s ecosystem token) each day for completing daily missions. Players will also be able to earn up to 5000 PLA in weekly PvP ranking tournaments. To be eligible to receive these rewards, players must stake three SR-grade PLAYZ NFTs (non-fungible tokens) for the daily PLA rewards and one SSR-grade PLAYZ NFT for weekly PvP rewards. PLAYZ NFTs required for staking can be obtained through synthesis or purchased on PlayDapp’s C2C Polygon Marketplace.

Regarding the usage of the NFT staking system, it will be a useful function when launching P2E games of various genres to increase the value of the NFT and encourage meaningful ecosystem participation."

‘Along with the Gods’ is a strategic RPG (role-playing game) where you can enjoy a variety of gameplay modes such as Raids, Exploration and Arena mode, with five classes and over 100 unique Heroes. Heroes can be upgraded and customized through Runes with various effects. These Runes can be converted into NFTs using the in-game Item Manager function and traded with other players. The Item Manager was developed by SuperTree and is a blockchain technology-based solution that converts in-game assets into NFTs.

In the past, only game developers and distributors made income through games, but now players who participate in games can also receive income through the P2E model. Sang Chung, COO of PlayDapp said "P2E game service has become a must, not an option. We will continue to develop within the booming P2E sector starting with ‘Along with the Gods’.

You can download and play ‘Along with the Gods: Knights of the Dawn’ through Google Play Store, and pre-registration details can be found on playdapp.com 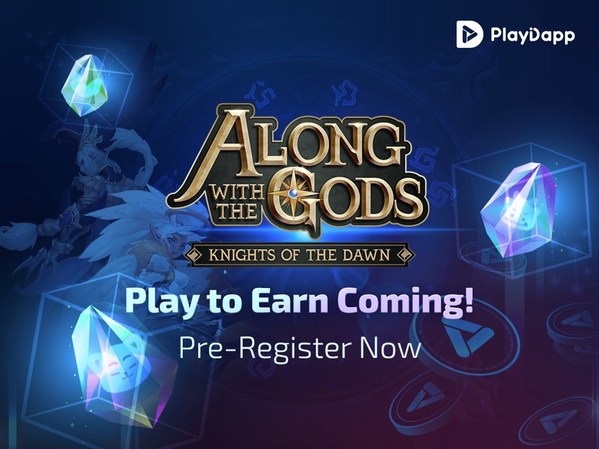 Blockchain game "Along with the Gods: Knights of Dawn" is launching P2E server