BEIJING, Oct. 31, 2022 /PRNewswire/ — The 20th National Congress of the Communist Party of China has drawn a blueprint for China for the next five years and beyond. What’s its significance to the world? What can the world expect from China in the years forward? And what will Chinese modernization bring to the global community? CGTN organized a special panel discussion titled "Now and Beyond," hosted by CGTN anchor Liu Xin, to discuss the path forward for China and the world with decision makers and global thinkers.

"The true China message was a message of multilateralism," says Professor Jeffrey Sachs, the director of the Center for Sustainable Development at Columbia University, when commenting on the biased coverage of U.S. media on the national congress. "China wants a multilateral world under the UN Charter very explicitly. It doesn’t seek domination; it doesn’t seek conflict in any way. And the message is absolutely explicit…What we need is dialogue, we need better understanding," Professor Sachs emphasizes.

"President Xi’s central message to the world is that China does want to commit itself to a peaceful world and pursues peaceful co-existence," Xie Tao, professor and dean of the School of International Relations and Diplomacy at Beijing Foreign Studies University, echoes Professor Sachs’s comment, adding that "China does not impose or export its own values, institutions to other countries, neither does China would like to see other countries to tell us what you should do. China has a massive population. China is very different from many other countries. And China is going to achieve national rejuvenation through a Chinese path to modernization," Xie states.

This is the first time that Chinese modernization is written into a report to the national congress and it’s the blueprint for China’s future. Martin Jacques, senior fellow at the Department of Politics and International Studies at Cambridge University, points out that Under American-style globalization, inequality spread across virtually all society. He notes that a key aspect of Chinese modernization is about common prosperity, and that if China can reverse the trend of inequality and create a more equitable environment, that’d have great impact around the world. "In the 21st century, whatever is good for the China needs to be good for the rest of the world. And whatever is good for the rest of the world needs to be good for China. This is the 21st century, we are living in the same planet," says the former foreign minister of Spain Arancha Gonzalez Laya.

Benyamin Poghosyan, the director of the Center for Political and Economic Strategic Studies, says that the attempts to divide the world into black and white is very concerning and that medium and smaller powers appreciate that China does not see the world through confrontation lenses as such a division would put medium and smaller powers in a difficult place. As inflation, energy crisis, food crisis and other challenges threatens everyone, cooperation between greater powers are much anticipated.

Many countries don’t want to choose between China and the U.S., former UN Environment Executive Director and Under-Secretary-General of the United Nations Erik Solheim points out. The South African Ambassador to China Siyabonga Cyprian Cwele says that there are a lot of things countries can learn from China. South African and other countries will not be made to choose but will accept anyone who respect their systems and be partner with them, says Cwele. Partnerships is what many countries are looking for, not coercions.

"You can lead either, by example, or generosity, or multilateral cooperation; or you can lead by coercion, you can lead by predation and the unilateral action," Professor Xie says, "China obviously has pursued the first route." He believes that global leadership for China is about providing benefits to the rest of the world, not for the claim of hegemony.

"All living things may grow side by side without harming one another, and different roads may run in parallel without interfering with one another," General Secretary Xi Jinping quoted an ancient Confucius philosophy in his report to the 20th national congress of the CPC. In a world where conflict and differences seem to trump cooperation and management, respect for differences and finding ways to move forward together is craved by many countries. China seeks a peaceful path to modernization and partnership with the global community. 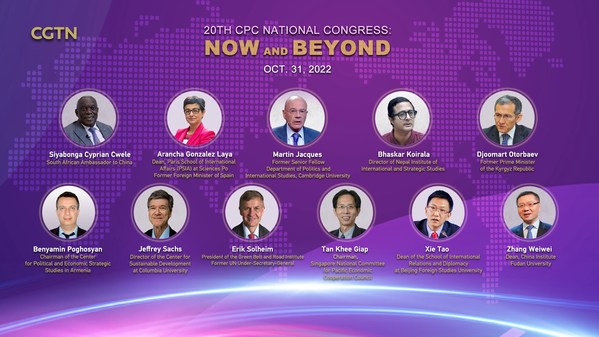 Now & Beyond TV Forum- Grow side by side without harming, run in parallel without interfering