The study, which surveyed usage and viewing habits on OTT platforms across Southeast Asia, shows Filipinos are avid consumers of OTT. The average Filipino OTT viewer watches 3.3 hours of content per day, versus a regional average of just 2.5 hours. The country also logs the highest percentage of heavy users across the region, with nearly one in three OTT viewers (32 percent) watching four or more hours per day.

The report reveals that COVID-19 has had a dramatic impact on OTT adoption. More than half (55 percent) of all Filipino OTT users report streaming more OTT content during the pandemic than before. These habits are likely to persist even in a post-COVID world as 65 percent say they plan to maintain or increase OTT consumption after the pandemic ends.

"The pandemic has accelerated consumer trends that will define the next era of TV consumption," said Mitch Waters, SVP of Southeast Asia, Australia, and New Zealand, The Trade Desk. "The shift to OTT streaming in the region, and specifically the Philippines where more than half of viewers are turning to OTT than ever before at higher viewing rates than other countries in the region, demonstrates the undeniable inflection point for TV consumption that will most certainly never turn back to the way it used to be."

Underscoring this point, the study also shows that OTT has the potential to seriously disrupt broadcast television in the Philippines. More than one in five (22 percent) OTT viewers hadn’t watched  traditional TV at all in the three months prior to the survey. That figure is among the highest in Southeast Asia, and second only to Malaysia’s 23 percent. What’s more, 1 in 2 users prefer to tune in between the hours of 8PM-12AM, bringing streaming into direct competition with traditional TV for valuable primetime audiences. Filipino viewers are also looking to OTT for their favorite content, with 62 percent tuning in to OTT to watch their favorite programming versus just 54 percent on traditional broadcast. 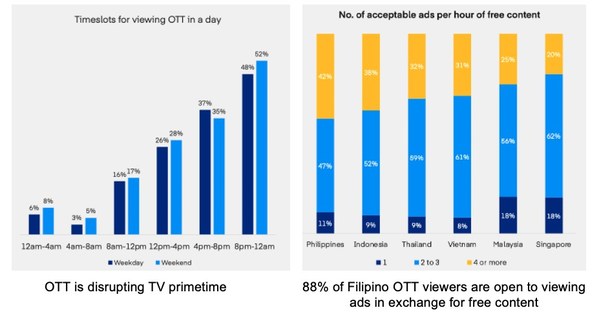 The rise of OTT has created opportunities for brands to reach and engage viewers. In fact, Kantar’s OTT Advertising Attractiveness Index, commissioned as part of this report, identified the Philippines as the most attractive market for advertisers in Southeast Asia, based on a combination of factors including OTT usage, satisfaction, ad response, connectivity, and consumer profile. Eight-eight percent of Filipino viewers will watch ads in exchange for free programming. The research also shows that 42 percent are willing to watch four or more ads per hour in exchange for free content, the highest in Southeast Asia. More than 20 million Filipinos tune in to at least one ad-supported OTT platform, and 55 percent of all OTT viewers are between 16-34 years of age, providing a new channel for brands to build relationships with this high-coveted demographic.

"As more young, engaged, and active Filipinos shift to OTT and are willing to view more ads, advertisers have an enormous opportunity in front of them" said Waters. "This provides an opening for advertisers to employ a data-driven approach with an improved advertising experience in a way that’s not possible with traditional TV.

Key findings from the research include:

This report was commissioned by The Trade Desk and carried out by the world’s leading marketing data, insight, and consultancy Kantar. Kantar conducted a survey among 4,500 consumers, ages 16+ in the Philippines, Singapore, Malaysia, Vietnam, Thailand and Indonesia in September 2020.

About The Trade Desk

The Trade Desk™ is a technology company that empowers buyers of advertising. Through its self-service, cloud-based platform, ad buyers can create, manage, and optimize digital advertising campaigns across ad formats and devices. Integrations with major data, inventory, and publisher partners ensure maximum reach and decisioning capabilities, and enterprise APIs enable custom development on top of the platform. Headquartered in Ventura, CA, The Trade Desk has offices across North America, Europe, and Asia Pacific. To learn more, visit thetradedesk.com or follow us on Facebook, Twitter, LinkedIn and YouTube.

A downloadable copy of the report can be found here.