CHENGDU, China, Nov. 2, 2020 /PRNewswire/ — Chengdu, the capital of Southwest China’s Sichuan province, released a new batch of "city opportunity lists" on Oct 29 in conjunction with domestic cities in the Chengdu–Chongqing economic circle and international cities involving the Belt and Road Initiative (BRI). The documents were made public at the 2020 China (Chengdu) Global Innovation and Entrepreneurship Fair (GIEF). 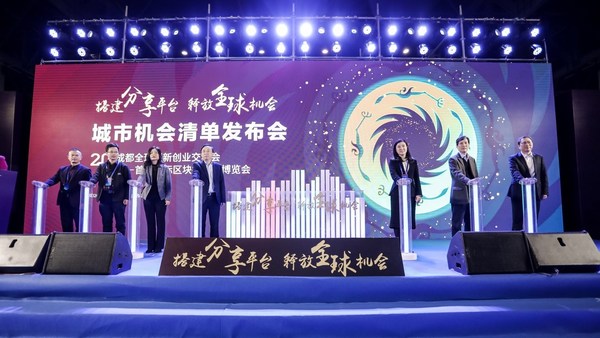 The newly released lists include 820 pieces of supply and demand information on smart production, smart life, smart governance and green economy. Of the total, 477 pieces are related to Chengdu; while 56 pertain to international cities in countries including Russia, Kazakhstan, Indonesia and Georgia, and 287 from domestic cities Deyang, Yibin, Meishan and Ziyang.

As the GIEF this year is focused on blockchain, the city specially released a list on blockchain development to fully demonstrate the innovative applications of blockchain technology in government services, urban governance, financial services and other fields.

A matchmaking event was held following the release, building a platform for new economy enterprises to match their products and technologies with the new economic scenario in Chengdu. Technology from numerous fields was featured during the matchmaking gathering, including smart city tech, big data, blockchain, digital cultural tourism and smart medical care.

Four cooperative projects worth 6 billion yuan ($893.4 million) were signed during the event. The projects involve demand and supply matching in countries involving in BRI, cross-regional cooperation in the Chengdu–Chongqing economic circle, as well as cooperation between smart cities and new financial enterprises in advanced technology fields such as blockchain and big data.

An essential part of the city’s efforts to buoy innovation, the move will promote the development of new technologies and emerging industries while facilitating their practical uses in urban development, said officials.