In collaboration with the China Green Foundation, MINISO launched the campaign in 14 countries. By sharing panda-related posts with the hashtag on social media platforms and participating in campaigns in MINISO stores, fans showed their support for pandas. MINISO will convert the support into donating bamboo forests which will be planted in Qinling Giant Panda Habitat in Shaanxi, a northwestern Chinese province.

As a result, MINISO received overwhelming feedback for the initiative from the brand’s lovers and panda fans globally, whose support, as of Oct. 7, has allowed the company to plant 50,183 clumps of bamboo. MINISO has already planted the first batch of bamboo and plans to finish planting the rest of the bamboo forest by the end of next spring.

Giant pandas are known as picky eaters with a preference for high-quality and specific bamboo varieties. Planting bamboo can not only feed the pandas but also help to bridge up their fragmented habitats that have been divided by human activities, allowing pandas to eat, move and breed more freely.

After decades years of conservation efforts, giant pandas are now classified as "vulnerable" in terms of risks of extinction and are no longer "endangered." However, it’s still necessary to manually plant and grow suitable bamboo for the survival of pandas, as bamboo resources are constantly shrinking, which is widely believed to continue to pose a threat to panda protection.

In a bid to raise awareness for panda conservation and bamboo planting, MINISO launched this campaign in late September on Weibo, China’s major microblogging platform, as well as on Instagram with the hashtag #PlantForPanda# to extend the outreach of the charity move. By Oct.7, the hashtags had drawn in interaction with more than 25,000 netizens.

Meanwhile, MINISO also launched an offline charity campaign that took place through Sept. 29 to Oct. 7 at the Company’s brick-and-mortar stores, with nearly 600,000 consumers participating in the event.

MINISO has long been committed to fulfilling its CSR duties and has launched charity initiatives covering various kinds of social issues. For example, earlier this year, the Company partnered with Peruvian NGO ECOAN to plant a tree in the Andes mountains for each certain figure item it sold. The project was joined by entities from 37 countries and regions and has donated 115,000 plants.

Also, for the past eight years, MINISO has launched more than 50 charity events and taken concrete actions to help support children, women and those who suffer from serious illness and disasters. Earlier this year, as part of its "Penpen2PENPEN" education charity drive, the Company encouraged consumers to donate pens to disadvantaged children. In order to scale up the education initiative, the brand also partnered with local non-profit organizations in various markets, including Malaysia, Bolivia, Thailand and Vietnam, to donate stationery, food, medical supplies and cash.

MINISO Group is a global value retailer offering a variety of design-led lifestyle products. The Company serves consumers primarily through its large network of MINISO stores, and promotes a relaxing, treasure-hunting and engaging shopping experience full of delightful surprises that appeals to all demographics. Aesthetically pleasing design, quality and affordability are at the core of every product in MINISO’s wide product portfolio, and the Company continually and frequently rolls out products with these qualities. Since the opening of its first store in China in 2013, the Company has built its flagship brand "MINISO" as a globally recognized retail brand and established a massive store network worldwide. For more information, please visit https://ir.miniso.com/. 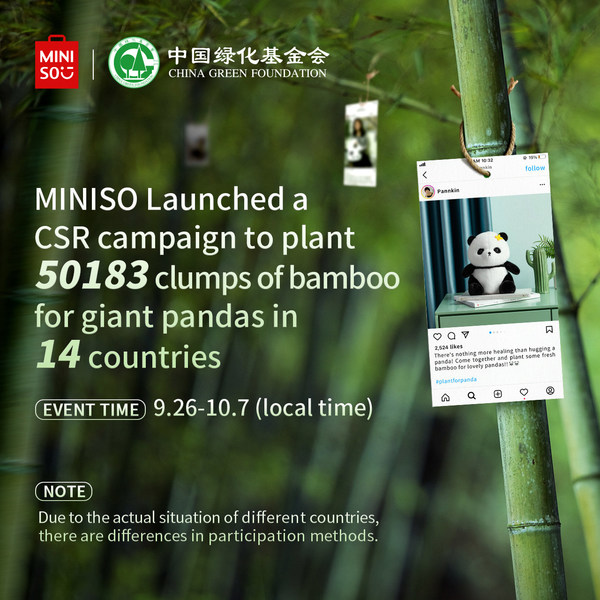