SEOUL, South Korea  and BANGKOK, Nov. 19, 2021 /PRNewswire/ — On November 27th, the Korea Agro-Fisheries and Trade Corporation (aT) plans to launch ‘K-Food Fair Live On’, an online cooking class for people based in Australia and Australians who are based in Korea. The class provides an opportunity to learn how to cook dishes from popular K-Dramas such as "What’s Wrong with Secretary Kim" featured in global OTT platforms. 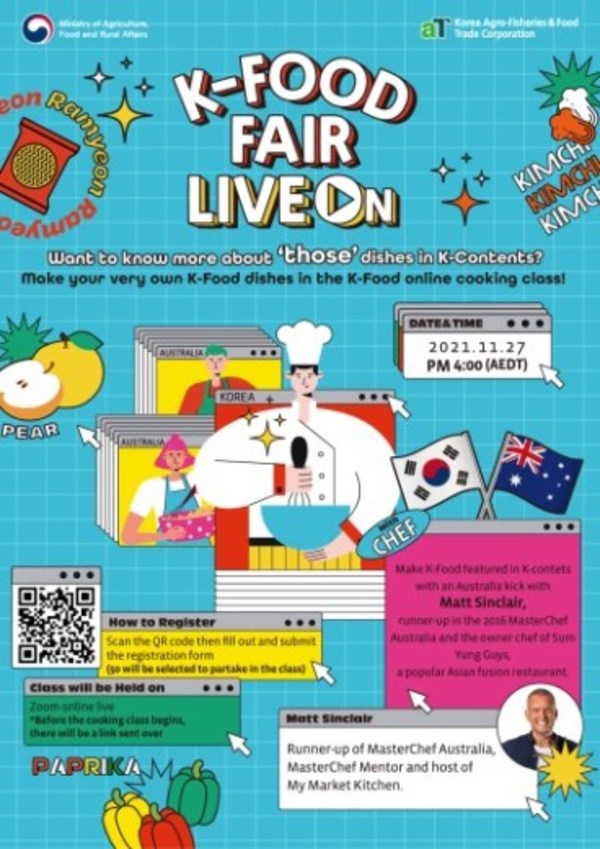 The cooking class will be led by Matt Sinclair, a runner-up in the 2016 MasterChef Australia who is actively involved in various food-related television programs. The class will consist of making ‘kimchi ramyeon pasta’, a dish that uses kimchi and ramyeon, a ‘pear ade’ using Korea’s key export item, Korean pears, and a dish localized for the Australians such as a ‘Macadamia ramyeon gangjung’.

‘K-Food Fair Live On’ will be held through the video conference application Zoom and one will be able to sign up for a possible spot in the class by scanning the QR code on the poster. Out of the applicants, 50 participants will be chosen and sent a meal kit containing the main ingredients and recipe cards for the class.

Also, after the cooking class, there will be an event held via social media where prizes will be given to a select number of those who post their dishes.

An official from the Korea Agro-Fisheries and Trade Corporation (aT) encouraged participation of the event by stating: "As the popularity of Korean dramas has increased around the world, Australian consumers are showing more interest in K-food. This class is a great way to get to know Korean food if one is interested in learning more about it – don’t miss out."