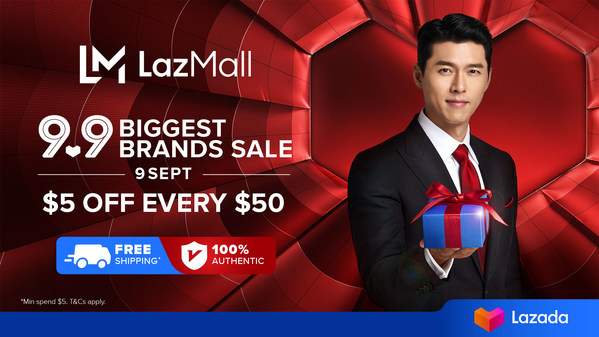 *Promotions listed in above image applicable only on Lazada Singapore.

One of South Korea’s most internationally-acclaimed celebrities, Hyun Bin is known as one of the key figures driving the Hallyu with his versatile and award-winning performances. Hyun Bin has starred in numerous successful television dramas and box office hits, including Secret Garden, Memories of the Alhambra, The Negotiation and more recently Crash Landing on You, which garnered him accolades including Most Popular Actor at the 56th Baeksang Arts Awards and Most Popular Korean Artist at the Yahoo! Asia Buzz Awards. Hyun Bin received a Presidential Commendation during the 2020 Korean Popular Culture and Arts Awards.

Mary Zhou, Chief Marketing Officer of Lazada Group shared, "Lazada was the first to bring the virtual ‘mall’ concept to Southeast Asia and we are delighted to welcome renowned super star Hyun Bin as LazMall’s first regional brand ambassador. With his expansive portfolio of critically-acclaimed films and television dramas, Hyun Bin is a familiar personality respected for his genuine personality and extraordinary dedication to his craft by fans all over the globe. This highly resonates with LazMall’s brand promise of authenticity, quality and a trusted online destination for consumers to enjoy a convenient shopping experience."

For the kick off celebrations of LazMall’s third anniversary and 9.9, the first of the year-end mega campaigns, Hyun Bin will headline a short film capturing the imaginations of fans in a character reminiscent of his popular action sequences. In the TVC, Hyun Bin will star as an agent on a covert mission commandeering a crew of operatives. In a fun and celebratory twist, his character will release thousands of LazMall care packages for the public.

On his LazMall ambassadorship, Hyun Bin said, "I’m very happy to be joining the Lazada family and connecting with fans in Southeast Asia as LazMall’s first regional brand ambassador. I look forward to creating lots of fun times together, starting with the 9.9 shopping festival. I wish everyone good health and hope you stay safe until we can meet again in person."

He added, "Shooting the short film for the campaign was incredibly fun, especially when we got creative in demonstrating the efficiency, reliability and variety of products that LazMall offers to shoppers through a secret agent mission storyline."

In addition to popular features like Brand Mega Offers and a bold returns policy of up to five times compensation[2] across the region, consumers will gain access to their favourite brands through an intimate, visual storytelling experience. This includes an enhanced discovery spotlight via The Prestige Edit, which features content-rich thematic editorial sections.

The 9.9 Biggest Brands Sale event will bring together the region’s most renowned brands as well as favourite Lazada marketplace merchants, and delight Southeast Asian consumers with exclusive deals and offers via an exclusive curation of time-limited Brand Mega Offers and Flash Sale promotions on 9 September[3].

Syncing up with the festivities, Lazada’s mascot Lazzie will also make his idol trainee debut via Lazada’s newest addition on LazGames – Lazzie Star. Shoppers can help Lazzie to "level up" to become a Super Star, by completing a series of daily tasks and special missions that will unlock exclusive platform and seller vouchers as well as Lazada Bonus rewards.

Founded in 2012, Lazada Group is the leading eCommerce platform in Southeast Asia. We are accelerating progress in Indonesia, Malaysia, the Philippines, Singapore, Thailand and Vietnam through commerce and technology. With the largest logistics and payments networks in the region, Lazada is a part of our consumers’ daily lives in the region and we aim to serve 300 million shoppers by 2030. Since 2016, Lazada has been the Southeast Asia flagship platform of Alibaba Group powered by its world-class technology infrastructure.