TAIPEI, April 7, 2022 /PRNewswire/ — Kingdom Heroes is a classic IP series that was developed by USERJOY, with 4,000,000 copies sold. The sequel Kingdom Heroes 8 English version was recently released on Steam. In January 2021, Kingdom Heroes 8 entered the weekly sales top 4 and now has topped 300,000 sales. We are releasing the features of the sequel, Kingdom Heroes 8 English version, to present the stimulating era of The Heroes of Three Kingdoms to you. The sequel inherited the horizontal battle vision and the strategy playing method, recreating the well-known officers and improving the visual experience, aiming to let the players explore freely and immerse in a battle with thousands. 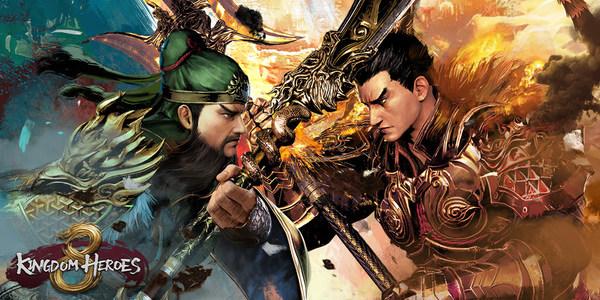 A splendid battlefield gives a great sense of visual perception

Kingdom Heroes 8 has the widest and most particular map compared with any other previous pieces. Apart from retaining the heuristic playing method, new elements and map objects are added. By operating a horizontal scrolling playing environment, players may have a high degree of freedom to explore and fight with others. 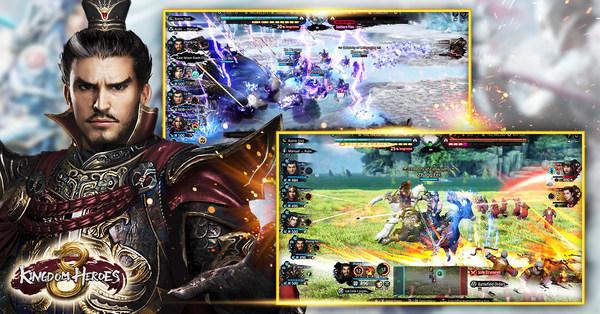 You can control every single general’s movement in Kingdom Heroes 8. As well as enjoying a strategy game, great satisfaction can be obtained from fighting thousands with your own. Adopting a 5 vs 5 battle mode, players can arrange their own camp and enjoy attacking rivals with an unceasing combo. For the battle strategy, reforming the previous piece of controlling the army with command, attacking direct targets will be possible now.

Make your own history! Ministers system convenience the Domestics system

Players refer to a monarch in the game. Every instruction would react in your game process, you will be the one who manages your empire and every breath you take can affect how history goes on.

About the domestics, the Ministers system has been added in this work. We have automated the operation by uniting the internal affair in the previous piece to simplify the management of the forces. Stronghold Ancillary is also added to endow the forces with different attributes and features that give the game enrichments. 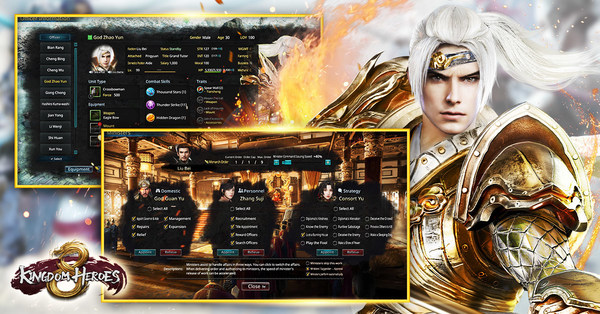 Great war with thousands! Exclusive magnificent skills for the officers

The essence of Kingdom Heroes 8 is about pitched battles. Before the battle starts, the players should go on for officers’ assignment, configure their skills, equipment, and the battle array. When the battle starts, the tactics can be flexible through assorting between the Famous Officer skills, normal skills, and timing. Controlling multiple officers finely will be possible in this generation. The officers’ unique skills have also been remade, all well-known officers own their magnificent ascend animation and a unique skill close up. 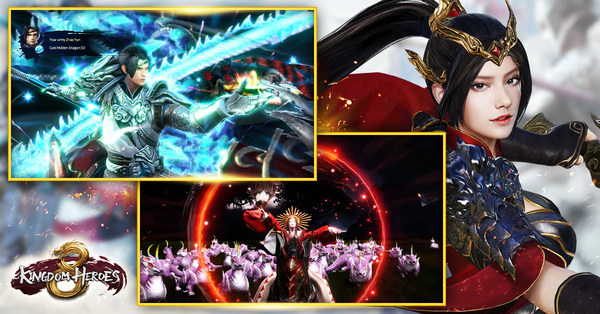 Thousands of officers are heroic on stage!

There are nearly 1,500 characters brought in this game, including characters coming out from the official and unofficial histories, Romance of the Three Kingdoms,  etc. There are officers from the last years of the Han Dynasty to the first years of the Western Jin Dynasty. Our team has also condensed the officers’ information to let the players lose themselves in the world of The Three Kingdoms.

Make good use of different army forces‘ restrictiveness to conquer!

For the army force, Kingdom Heroes 8 got dozens of forces with exclusive districts and the army corresponds to special forces. Each of them has a relationship of restriction, except experiencing wars with thousands, making good use of this restrictiveness may also lead you to victory. 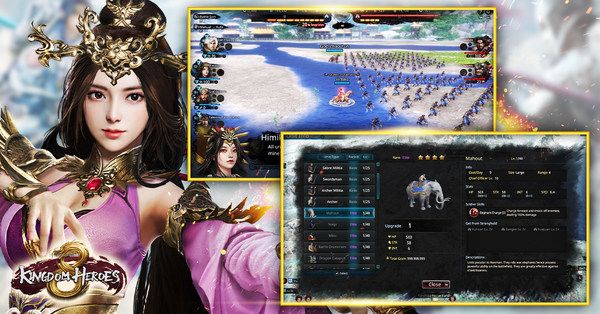 Exclusive weapons for the officers to exert their strength with 200%!

Sharp tools make good work. There are various types of weapons in Kingdom Heroes 8, including 1H Weapon, Long Bow, Polearm. Besides those basic weapons, well-known officers have their exclusive weapons which are main their properties. When the officers wear their exclusive weapons, it can trigger an awakening effect for them to strengthen their capabilities.

The War of Japan is uprising! The Queen Himiko’s content has been added in DLC!

A paying DLC of Kingdom Heroes 8 is rolling out at the same time. New plots, new forces, new types of armies, and the mystic queen from Japan comes to the world of The Three Kingdoms as one of those new forces and was a general that can be chosen.

Kingdom Heroes 8’s R&D team strives to strike a balance between classics and innovation. We would like to present a piece that is different from the past, intending to bestow our players a better game experience.

Kingdom Heroes 8 English version is now available on Steam! Come for it if you are interested!

Including all contents in Kingdom Heroes 8

The War of Japan DLC

Plot extension in Kingdom Heroes 8, including Unified the World by Jin, The War of Heroines, Reigning in troubled times, and new forces as Japanese with general Himiko.

2. Kingdom Heroes 8 -The clothes for Hibiscus