TAIPEI, Dec. 28, 2020 /PRNewswire/ — On December 25, under the announcement of Kaohsiung City Mayor Chen Chi-Mai, the Kaohsiung Smart City Committee was established. The committee is composed of leaders from the government, industry, universities, research institutes and Institute for Information Industry including Digital Minister Audrey Tang from the Executive Yuan, Lee-Feng Chien Board Member of the Board of Science and Technology, Executive Yuan, and senior executives from AWS, Microsoft, Siemens, IBM, ASE Group, Advantech, ChungHwa Telecom, FET, III among others. 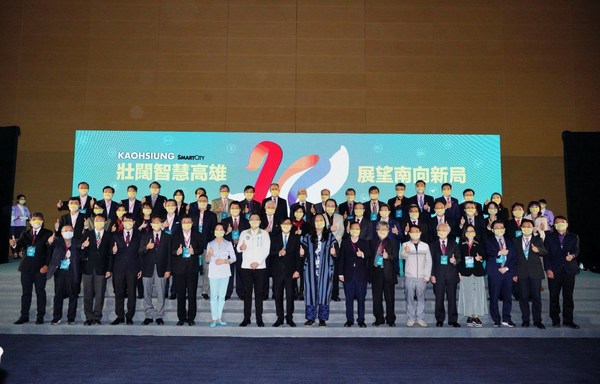 Chairperson Dr. Kung Ming-Hsin of the National Development Council specifically expressed his support. He said that the living environment in Kaohsiung is similar to that of the new southbound countries and it is easier to establish contact with the southbound market. Dr. Kung further suggested that as smart cities enter the 5G era, it would create new opportunities for innovative smart applications and systems. Kaohsiung can offer its unique environment and industrial setup as a preferred POC test field and transforms into a gateway for export to new southbound countries.

Kaohsiung City Mayor Chen Chi-Mai stated that the members of the Kaohsiung Smart City Committee are all elites from various domains. He believes that the city government can find the right antidote and provide valuable suggestions for the problems faced by the city government. In the future, the development of smart cities will be driven by the digital industry. Through "Demonstrating in Kaohsiung and exporting to the world", it will lead the development of digital economy to a new stage, making Kaohsiung an important hub for the global digital industry.

Kaohsiung City Deputy Mayor Charles Lin, the Deputy Convener of the Kaohsiung Smart City Committee, stated in his speech that the city will formulate a development strategy to facilitate future development of Kaohsiung Smart City, He urged the city government, telecommunications industry and the public to work closely together to resolve public governance issues.

Executive Secretary Tsai Zse-hong of the Board of Science and Technology, Executive Yuan, also believed in Taiwan system integration vendors’ capability. After conducting demonstrations in the local market, they should explore the vast business opportunities of smart cities in the new southbound region.