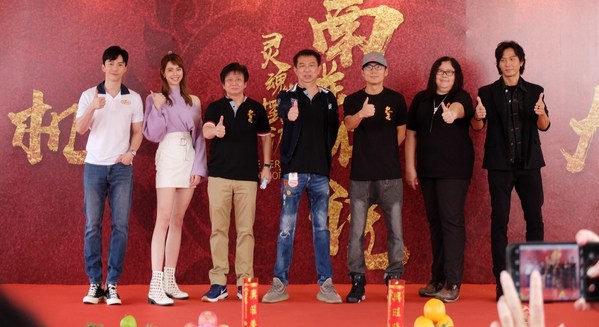 The main crew of "The Ferryman: Legends of Nanyang". Lawrence Wong, lead actor of the drama and iQIYI International’s first VIP member ambassador, is first from the left.

Adapted for the region in terms of cast and crew, storyline and location selection, the Series will provide a more localized viewing experience for Southeast Asian users who resonate with the Series’ geographical and cultural background.

The Ferryman: Legends of Nanyang will showcase the Nanyang’s rich and diverse culture including Singapore’s Peranakan. The Series will be mainly shot in Singapore, featuring famous landmarks such as The Merlion, Marina Bay Sands, Clarke Quay and Orchard Road. The Soul Ferry IP franchise boasts a strong user base thanks to its novel subject matter, high production quality and social significance. Since its release, Soul Ferry, which was China’s first original online drama series, has gone on to receive critical and acclaim and widespread popularity.

iQIYI International also appointed leading actor Lawrence Wong in the Series as the company’s first VIP member ambassador. Wong is widely popular in Southeast Asia for his outstanding performances in films, dramas and variety shows. Wong received high acclaim for his performance in Story of Yanxi Palace, which was an international hit popular amongst Chinese and Southeast Asian audiences.

iQIYI International has made remarkable progress in content localization for the Southeast Asia market since it launched there in June 2019. Headquartered in Singapore, the business has recently accelerated its expansion with the appointment of several senior executives with significant experience in business development in the region. To meet the needs of Southeast Asian audiences, iQIYI International recently translated and simulcast its hit original variety show Youth With You Season 2 in English and Thai for the first time. The Ferryman: Legends of Nanyang marks a new phase in the company’s growth as it produces increasingly localized content that caters to the diverse needs of global audiences. To support its continued growth in Southeast Asia, iQIYI International is currently in the process of setting up offices in Thailand, Malaysia, the Philippines and Indonesia.