TAIPEI, March 16, 2021 /PRNewswire/ — Server manufacturer Inventec (TPE: 2356) is proud to support AMD, in launching its new AMD EPYC™ 7003 Series processors. During the launch, Inventec is set to unveil its new Horsea server system which is powered by the new processors. 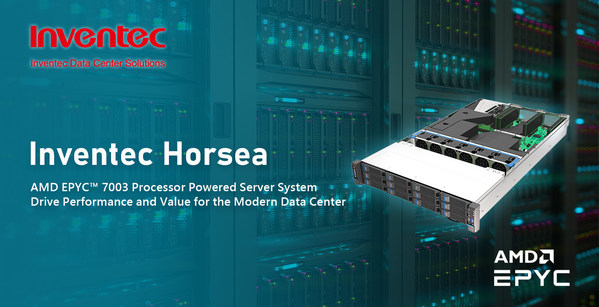 No new hardware is required with the AMD EPYC™ 7003 Series processors, which are compatible with the AMD EPYC™ 7002 Series processors; a simple BIOS flash update will suffice[iii]. Memory performance is enhanced with the largest available x86 L3 cache, or up to 32MB per core. Added security capabilities are locked down by AMD Infinity Guard technology and a silicon embedded security subsystem, providing top tier security in the cloud and on-prem.

The features of Horsea include:

"Inventec is proud to have partnered with AMD. We always try to deliver innovative products that combine the strengths of AMD EPYC™ processors. Horsea is an enhanced performance 2U server based on dual AMD EPYC™ 7003 Series Processors. It is designed for modern software-defined infrastructure, offering a robust and outstanding solution for the new generation workload," said George Lin, General Manager of Business Unit VI, Inventec Enterprise Business Group (Inventec EBG).

Inventec Data Center Solutions (Inventec EBG) was established in 1998 and has been focusing on the design and manufacturing of server systems in Inventec Corporation. Over decades, Inventec EBG has been the key server system supplier of the global branding clients.

Follow "Inventec Data Center Solutions" on LinkedIn and Wechat to receive their latest news and announcements.

[i] Claims are speculative and are pending testing as of 2/14/2021. Actual claims and claim statements may vary.

[iv] AMD Infinity Guard security features on EPYC™ processors must be enabled by server OEMs and/or Cloud Service Providers to operate. Check with your OEM or provider to confirm support of these features. Learn more about Infinity Guard at https://www.amd.com/en/technologies/infinity-guard. GD-177