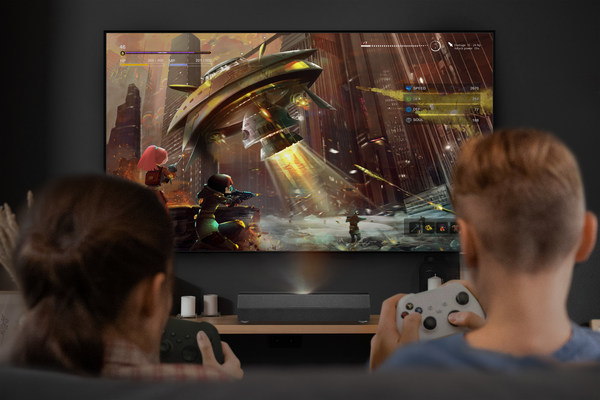 The CinemaX D2 is an ultra-short throw projector that can project a 100-inch screen and project a maximum of 120 inches by just 25cm away from the wall. The ultra-short throw projector is a product that can realize a large screen even at a short throw distance, and unlike a typical projector, it requires only a small amount of space between the screen and the projector, so there is no need for a separate installation process. Since it can be placed on top of a decorative cabinet or installed in a buried form, interest and popularity are increasing as a substitute for TVs in addition to home theaters at home.

Optoma’s home entertainment lineup, CinemaX’s D2, offers a high refresh rate of 240Hz (1080p) and an input lag of 4.2ms in enhanced game mode in addition to excellent color reproduction. It provides a gaming environment comparable to a monitor with the shortest input lag of the projector. The built-in 20W output speaker is equipped with a sound engine optimized for Optoma products. It also supports eARC (Enhanced Audio Return Channel) for high-quality movie soundtracks or music. eARC not only supports audio data transmission with a high bandwidth of up to 37Mbps, but also supports uncompressed 5.1 channel signals without a separate AV receiver. In particular, if the existing sound bar supports eARC, product functions can be upgraded without a separate receiver. In addition, it supports various convenient functions, such as eye protection through the built-in PIR sensor, 3×3 warping that can be projected even on curved screens, and color correction to match the projected wall color.

Gordon Wu, General Manager of Optoma Asia Pacific, said, “We are delighted to launch Optoma’s new CinemaX series, the D2, in the Korean market. In particular, we are confident that it will satisfy customers who prefer a variety of usage environments by providing gaming functions optimized for projectors.” Regarding the D2 series, Youngsoo Jang, president of Optoma’s Korean business development, said, “Optoma’s new 4K UHD ultra-short throw series will usher in a new era of laser home entertainment projectors with an easy installation process, stable brightness and output, game-specific features and reasonable cost. I am sure,” he said.

The Optoma CinemaX D2 are available for purchase at major online stores from July 25, and an ART-CRL screen and Homatics BoxQ Android TV will be provided as launch gifts. The ART-CRL screen blocks light coming from the top to enjoy clearer and brighter images. Homatics Box Q Android TV supports most OTT services and can be used by installing various apps and games from Google Play.  The launch price of the Optoma CinemaX D2 is 3,290,000 won and additional information about the product can be found on the company’s website at www.optoma.com/kr.