NANJING, China, June 25, 2021 /PRNewswire/ — On the morning of June 21, the 2021 Nanjing Tech Week officially kicked off. It attracted global attention and opened the "Innovation Moment" again. 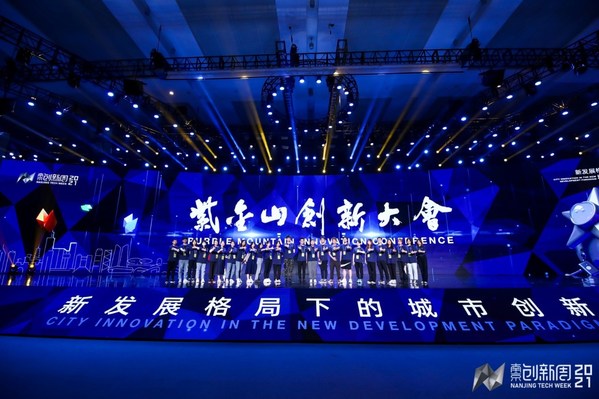 At the opening ceremony, Xu Nanping, Deputy Minister of the Ministry of Science and Technology, said, "Nanjing, as the first batch of national innovative cities, has set a new benchmark for the construction of national innovative cities." It will continue to increase the efforts to support Nanjing in creating original innovations and efforts in the areas of strategic source, carbon peaks, carbon neutrality, and scientific and technological system comprehensive reform pilot areas, according to the Organizing Committee of Nanjing Tech Week.

In the keynote speech, Fan Gang, professor of economics at Peking University, said that the Chinese Academy of Sciences, as a national strategic scientific and technological force, is cooperating more and more closely with Nanjing, and a group of CAS high-end innovation resources is accelerating the gathering, forming a regional innovation highland of subject clusters and spatial agglomeration. At the meeting, the 3rd-generation Semiconductor National Technology Innovation Center (Nanjing) was unveiled.

As the representative of Russia, the guest country of this year’s Tech Week, Mr. Raspertov, Acting Director of the Department of International Cooperation of the Ministry of Science and Higher Education of the Russian Federation, said in an online speech that this year’s Tech Week has a rich series of Russian-Chinese cooperation activities involving information technology, biotechnology, new materials, AI and other fields. This in-depth cooperation showed that Russian and Chinese scholars and researchers are interested in establishing contacts and developing mutually beneficial cooperation in the priority areas of the two countries. "I believe that the various activities held here will help build a sustainable platform and promote the implementation of international scientific and technological projects and innovation cooperation."

The World Intellectual Property Organization released the 2020 edition of the Global Innovation Index, showing that Nanjing has achieved great improvement in four years, and its ranking has jumped from 94th in 2017 to 21st; Nanjing is ranked 8th in the global scientific research cities selected by the authoritative journal "Nature".

Innovation has been integrated into the blood of Nanjing’s development and has become the distinctive temperament of the city.