The site has been upgraded with the Huawei iSuperSite solution since August of this year. The original six cabinets were replaced by just one, minimizing grid power consumption. The site was then selected as a green and energy-saving demo site by China Mobile Zhejiang as part of its carbon emission reduction campaign. The upgraded site not only halves electricity fees and cuts O&M costs by 75%, it also reduces carbon emissions by eight tons per year.

Before reconstruction, the site had six cabinets and six separate cooling systems with individual installation space and power supply systems. However, this resulted in a large footprint, low power system efficiency, and significant power consumption.

Following implementation of the Huawei iSuperSite solution, the power supplies, devices, and batteries from the existing six cabinets have been integrated into just one. 80% of floor space is reclaimed in this manner, allowing for the installation of a Huawei iPV power generation system to supply solar energy. Compared with traditional PV power generation system, Huawei’s iPV boasts 20% more energy yield and electricity cost savings of US$2,000 per year, equivalent to a carbon emissions reduction of 8 tons. Prior to the upgrade, the site’s annual electricity fee was approximately US$3,500. 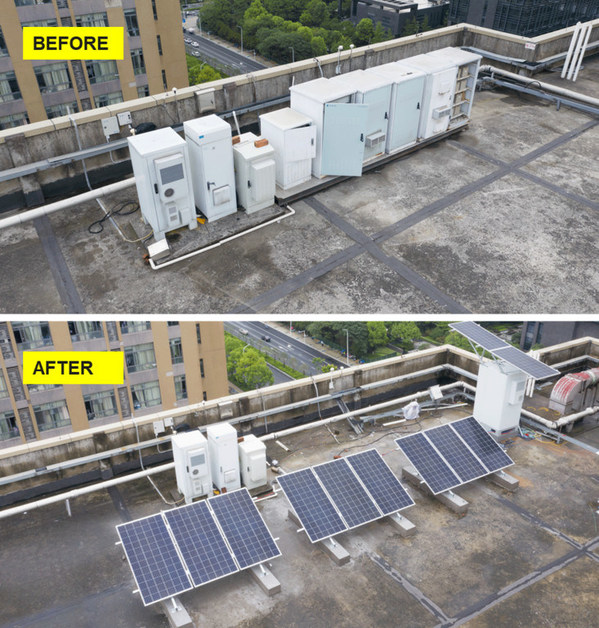 Comparison before and after the "1 for 6" reconstruction

To ensure that network transmission is not interrupted in the case of incidents such as lightning strikes and power outages, a communication base station requires backup battery strings of different sizes.

Huawei iSuperSite replaces lead-acid batteries with CloudLi smart lithium batteries, doubling the power density and upgrading the traditional backup power unit to an intelligent energy storage system. More importantly, the AI intelligent self-staggering feature can store power during off-peak periods and discharge power during peak hours. The electricity cost savings over the course of one year may exceed US$1.5 billion if all communication sites in Hangzhou use this feature (calculated based on the residential electricity price with the smallest difference between peak and off-peak periods).

The convergence of 5G, cloud computing, edge computing, and AI technologies in the context of "new infrastructure" has presented a diverse range of possibilities for digital transformation. Energy, as the cornerstone of a digital society, will inject momentum into the development of the digital economy. In the context of China’s national goals, which involve reaching a carbon peak by 2030 and achieving carbon neutrality by 2060, various industries are about to undergo a broad and profound systematic transformation. Energy conservation, consumption reduction, and carbon emission reduction are essential to ensuring sustainable development of the communications industry.

The Huawei iSuperSite solution integrates digital, power electronics, and ICT technologies, helping carriers to upgrade and reconstruct existing sites while saving power and space. This solution not only meets the requirements for the rapid coverage of communications networks in the 5G era, but also minimizes energy consumption, enabling carriers to achieve their carbon emission goals and build a green future together.