QINGDAO, China, Jan. 11, 2021 /PRNewswire/ — "In 2021, as a leader in the laser display industry, Hisense will bring Laser TV into the TriChroma era!" On January 11th, Fisher Yu, the President of Hisense Visual Technology, officially announced at the virtual CES 2021 that Hisense will launch a full range of TriChroma Laser TVs with screen sizes ranging from 75-inch to 100-inch, and its brightness, color gamut, and immersion experience are significantly improved. It means that Hisense officially brings Laser TV into the TriChroma era. In 2021, as a leader in the laser display industry, Hisense will bring Laser TV into the TriChroma era!

As the global vane in consumer electronics industry, CES has attracted much attention every year. Affected by the epidemic, CES 2021 embraces its first-ever virtual event in history. Hisense made its debut at the 2021 Consumer Electronics Show at 7 am on January 11th. As usual, Hisense will launch the latest laser TV products as the most important part of CES. This year is no exception, and Hisense officially launches TriChroma Laser TV with screen sizes ranging from 75-inch to 100-inch. 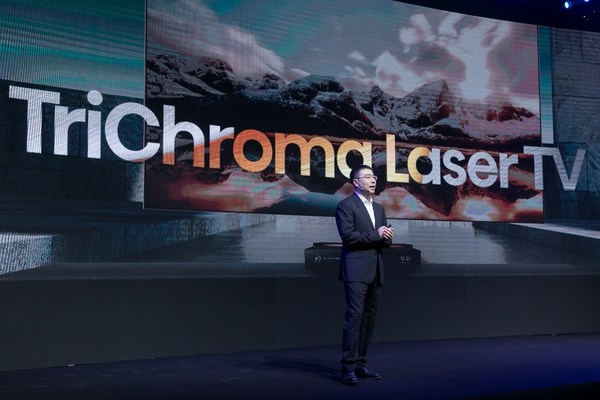 In 2021, as a leader in the laser display industry, Hisense will bring Laser TV into the TriChroma era!

"From dual color to full color, we have achieved a 128% improvement in the original RGB color. The TV’s highest color gamut standard can reach 107% BT2020. The three primary color light sources, with extremely high color purity, bring an amazing color performance. The color gamut coverage can reach up to 151% of the DCI-P3 film color standard, which is almost 50% beyond high-end cinema." Dr. Liu Xianrong said, the product experience provided by standard TriChroma Laser TV has improved significantly.

"Hisense defined two crucial requirements for immersive viewing demands: presence and experience for display devices that need to satisfy family immersion." Dr. Liu Xianrong introduces that Laser TV creates presence with a giant screen. Specifically, something at least 75 inches; one with full color coverage of DCI-P3 standard, and brightness over 350 nits; and one that brings experience to life with close watching and eye-comfort. As a TV product in the AIoT age, Laser TV also satisfies the requirement of families’ desire for socialization and entertainment. For example, the new Laser TVs are equipped with AI smart cameras to support deep interaction such as online karaoke and fitness.

Since Hisense’s first 100-inch Laser TV launched in 2014, the resolution has improved from 2K to 4K; the light source has evolved from laser-phosphor to dual-color laser, then TriChroma laser; and the size has expanded from 75-inch to 100-inch and now to 300-inch! In only six years, all of these product upgrades and advancements have been achieved.

The possibilities of laser display are being accelerated more than ever before. According to statistics, the overseas sales of Hisense Laser TV increased by 288% YOY in 2020, with great performance in 17 countries around the world including the United States, Mexico and Australia. In China, Hisense Laser TV get three models into the top 10 best-selling list 2020. Simultaneously, the entry of Samsung, Sony, LG and other global leading manufacturers has also brought new vitality to this new display technology, dominated by China. The Consumer Electronics Survey Office of the China Electronics Chamber of Commerce researched TV consumers over the past three years, and the results showed that laser TV had the highest recommendation rate at 70%, greatly exceeding the industry average of 54%.

As a brand-new TV category launched only five years ago at CES, Laser TV has moved from a niche market to a mass market from the view of market, consumers and manufacturers. Laser display technology is showing the characteristics of Moore’s Law, and the explosive market growth is about to start.