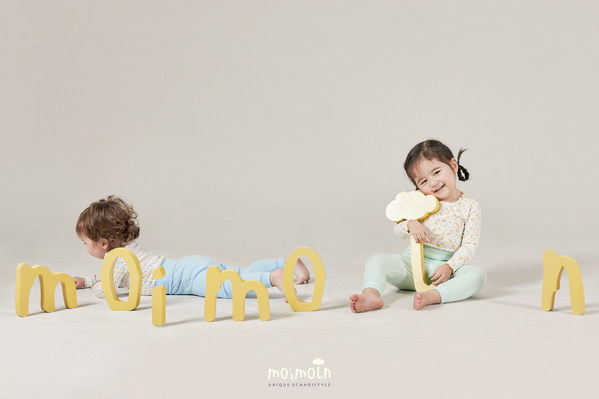 In preparation for the launch moimoln, 14 kinds of products for the spring/summer 2022 season were specially selected and redesigned exclusively for the U.S. market. These snug-fitting garments strictly comply with the flammability standards for children’s sleepwear set by the Consumer Product Safety Commission (CPSC).

The flagship product is the "Popo solid pajamas set," which is a signature line that features images of clouds. As a steady seller that shows the characteristics of the brand, such as soft and stretchy fabrics, moimoln plans to foster it as a hero product that demonstrates the brand’s capabilities by launching exclusive colors and materials on Amazon each season. In coming September, moimoln will launch additional 27 styles for the fall/winter season along with future releases that are sure to appeal to local lifestyles and preferences.

The American children’s clothing market has been growing steadily over the past few years, reaching a market value of around USD 34 billion in 2019. Experts predict that the market will grow to around USD 40.6 billion by 2023. In fact, according to Euromonitor International, the American children’s clothing market recovered quickly in 2021 despite COVID-19 and even achieved higher growth than before 2019. Similar to Korea, the number of young parents in the U.S. is increasing, and unlike in the past, parents are demanding fashionable children’s clothing rather than merely focusing on practicality.

Given this market potential, moimoln created a strategy to set the U.S. market as a stepping stone to globalize its brand. moimoln expects that its strengths, such as the brand’s unique nature-friendly Nordic style concept, differentiated graphics and unique colors, along with premier quality, which have been recognized in the domestic, China and Japan markets, will also be a hit in the U.S. market.

As Amazon accounts for 40% of the American e-commerce market, moimoln has chosen Amazon as the main channel to promote its brand to a wide variety of U.S. consumers in a comfortable and familiar way. moimoln will focus on solidifying its foothold in the U.S. market by increasing brand awareness, collecting customer feedback, and launching products that target the U.S. market through Amazon. To do so, moimoln is actively expanding its local marketing activities by launching a dedicated North American brand website and Instagram page.

Kim Jiwon, CEO of Hansaedreams, said, "We have decided to enter the U.S. market to become a competitive global brand based on our success in South Korea, China and Japan markets," adding, "moimoln, which was created by reflecting the sensible taste of Millennial and Generation Z consumers, will strive to become a global children’s clothing brand that captures the hearts of people around the world.

Meanwhile, moimoln, the leading brand of Hansaedreams, is becoming one of Korea’s representative children’s clothing brands, achieving positive outcomes in China and Japan and attracting attention from consumers around the world. In Japan, the company is receiving an enthusiastic response, with its own online store in Japan sales alone recording a monthly average of about 79 thousand dollars and major Japanese department stores requesting moimoln to open pop-up" stores.

As a subsidiary of Hansae Yes24 Holdings, Hansaedreams operates Curly Sue, Play Kiz Pro, Converse Kids, and Levi’s Kids, which are leading the children’s clothing market in Korea, and is set to merge with the affiliated company Hansae MK in July 2022. Because the merger is between two accomplished fashion companies, it is expected to create positive synergy.