SHANGHAI, Oct. 24, 2022 /PRNewswire/ — As the world’s leading e-sports equipment brand, GTPLAYER announced its official partnership with Blizzard Entertainment to launch the GTPLAYER Lich King co-branded gaming chair, which is also GTPLAYER’s largest collaborative series to date, and will be released globally on October 24. 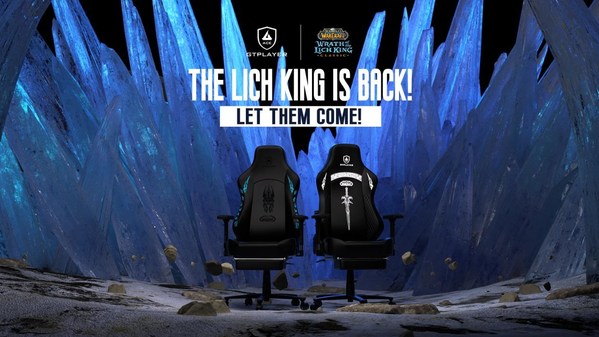 "World of Warcraft" is definitely high on the list of the masterpieces enjoying worldwide popularity, and among the "World of Warcraft" series, the Lich King is one of the most popular, with well-rounded and successful characters and countless fans who have found love and hate in him.

This September is destined to be extraordinary for the existing players of "World of Warcraft". Blizzard officially announced that the "Wrath of the Lich King" content will be launched in the World of Warcraft Classic on September 26. The Lich King once again reigns in the world, which is enough to excite millions of fans.

The Lich King co-branded gaming chair is inspired by the Lich King, with a total of two styles and four colors. The chair as a whole is built in the shape of a "throne", with the embroidered patterns of the Lich King’s iconic Helm of Domination and Frostmourne on the front, and the classic shape of the Lich King on the back. which will bring players into the burning scenes of "World of Warcraft" in seconds and instantly ignites the atmosphere. With smooth lines and a cool five-claw grip, the chair is easy to sit and lie down, chic and dynamic. Exclusive NFC anti-counterfeiting certification chip, enlarged adjustable 4D armrests, Bluetooth audio and other enthusiast-level configurations are enough to bring players a strong sense of competition.

This gaming chair co-branded by GTPLAYER and Blizzard Entertainment will be pre-sold on October 24. In addition to the chair, GTPLAYER revealed that a joint gaming table would be launched later, which will continue to spur enthusiasm and expectations.

For the latest news, please visit: