SHENZHEN, China, Jan. 14, 2021 /RPNewswire/ — In Shenzhen, a city with thriving technology and economy, people are exploring the light of art for themselves. On the evening of December 25, 2020, GLOW SHENZHEN 2020 officially opened in the Civic Center, the "heartland" of Shenzhen.

This is the first time for Shenzhen to hold a grand light festival, which will last until February 26, 2021. It aims to deliver an internationally-recognized carnival of artworks created from sound, light, shadows, electricity, and other tech-based carriers. During the festival, 179 works of light art and new media from various countries will be displayed in 34 theme activities held at 20 different sites, covering five districts of the city.

Hosted by the Urban Administration and Law Enforcement Bureau of Shenzhen Municipality and the people’s governments of five districts (Futian, Luouh, Nanshan, Yantian and Bao’an), and organized by IDG World Expo China Co.,Ltd., the festival is a manifestation of cooperation between government and business. In addition, the 1st Shenzhen International Light Art Forum will be held during GLOW SHENZHEN 2020 with strategic support provided by Shenzhen International Investment & Promotion Association (SZIIPA).

Wen Bin, Director of IDG ASIA Accelerator, said that he was looking forward to the positive role of tech-based art in promoting the cityscape and the night economy in Shenzhen. With its resources in technology, investment, convention& exhibition, industry& research, media, and culture& tourism, IDG ASIA aspires to facilitate the exploration of how art can be expressed in this "city of technology" and how cities in China can look like in the future. 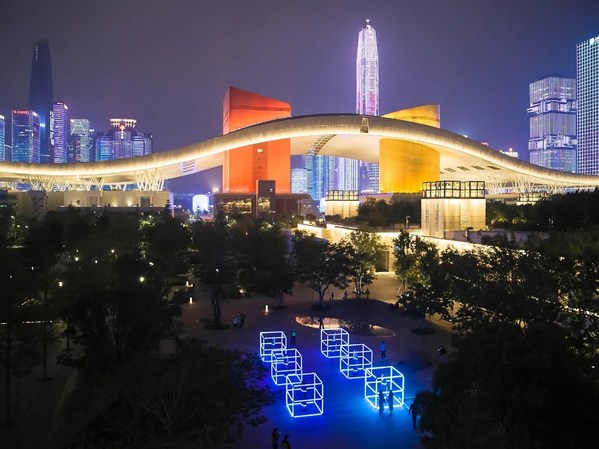 GLOW SHENZHEN 2020 in the Civic Center of Shenzhen

GLOW SHENZHEN 2020 is not only a light festival displaying "tech-based art" but also a grand ceremony featuring "citizen-friendliness" and "full-scale linkage in the city".

Design. GLOW SHENZHEN 2020 has been designed to arouse empathy of the audience with the artworks and realize the integration of art into the city. Take the district of Luohu as an example: in order to strike a chord with the audience, the organizers have chosen four landmarks representing Shenzhen’s spirit in the past four decades as activity sites and art creation there has be based on local features. This way, a kind of intimacy can be built based on geographical proximity.

Layout. Activities in GLOW SHENZHEN 2020 cover the major public and business areas in five districts of the city, and the boundaries between areas have been intentionally broken down. In the district of Futian themed "Re-connect", for example, visitors can walk to the Street of Festival by way of shopping malls, parks, and the Citizen Square. Such flexible and interconnected routes of visit are ways to rebuild human-to-human and human-to-city connections in the post-epidemic times.

Both city-district collaboration and government-business cooperation stand out in GLOW SHENZHEN 2020, which gives full play to the active role of the society and enterprises. In the most popular business or tourist hubs, light shows or other activities will be held in line with the characteristics of each site to boost the city’s night economy in a sustainable way.

Hopefully the innovative light artworks in GLOW SHENZHEN 2020 can make the city’s public space more artistic, said Wen. It is also expected that the festival can promote the city’s night economy, enrich citizens’ nightlife, and deepen the connections in between. 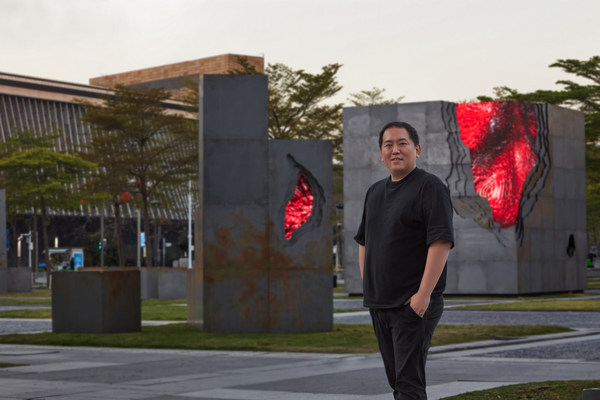 Wen bin with the works of light art “Time Peeling”

Exploring how China’s cities will be shaped in the future

Shenzhen holds a very special position in China: as one of the "special economic zones", it is not only a witness of China’s "Reform and Opening-up" but also a manufacturing hub for what is "Made in China".

Therefore, Wen believes Shenzhen has good reasons to host a tech-based art carnival of its own. First, the city has its technological strength and a complete industrial chain of production. Second, governments in Shenzhen have been appreciated for serving the people heart and soul. Third, numerous young people from across the country who are curious about the world have been attracted to Shenzhen—the most vigorous "sleepless city" in southern China.

"Shenzhen is the youngest first-tier city in China. The average age of residents here is 32. They take interest in technology, love their lives, and desire to be exposed to art." According to Wen, recently Shenzhen has welcomed many domestically and internationally renowned exhibitions of new media art/technology and hosted several art festivals/biennales itself. Whenever these events take place, they will become a hit around the city and attract long queues of visitors.

"This reflects the need and desire of people in Shenzhen for art activities. They are able and willing to pay for that," said Wen. It is the new, younger generation of Chinese like those in Shenzhen who are shaping China’s cities in the future.

Wen believes that GLOW SHENZHEN 2020 is not only a festival of art but also an exploration of integration. "I hope that when tech-based art is integrated into the city, the industry and the business world, it can empower citizens’ lives, the city’s cultural development and international cultural exchanges."

In addition, the 1st Shenzhen International Light Art Forum will be held during GLOW SHENZHEN 2020 with strategic support provided by Shenzhen International Investment & Promotion Association (SZIIPA). Taking advantage of its powerful connections with companies and organizations from across Shenzhen and the region, SZIIPA will actively contribute in building up a diversify think bank that includes representatives from different fields, attracting global investment resources, and providing a platform that not only opens dialogues on topics such as Technology & Industry Development, Urban Art and Economic Development, but also promotes application of technology and art on industrial development. Top artists and curators from home and abroad will be invited and effectively engage in a global dialogue on how the art of light can empower future cities development, promote technological progress and Night Economy, and the integration of art and tourism.

Wen hopes that the forum can bring about an industry-academia-research platform for the development of tech-based art. The platform is expected to help Shenzhen lead the world in scientific and technological innovation and play an exemplary role in the integration of "technology + art". Finally, GLOW SHENZHEN is sending its gracious invitation to all artists and art industry from all over the world.