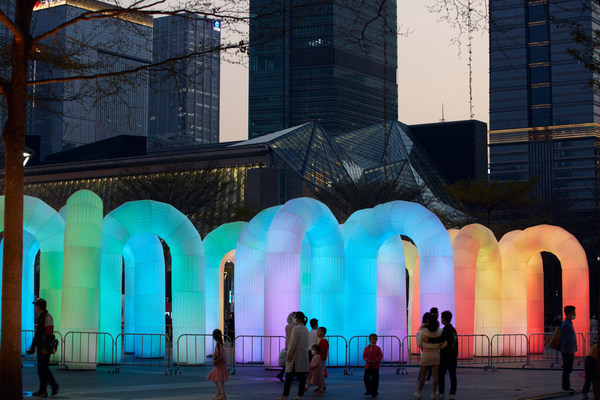 In the past two months, 34 theme events were held at 20 different sites in five districts of Shenzhen to display 179 works of light art and new media art from various countries. The festival not only brought citizens a world-class light art carnival, but also diversified civil culture and boosted the night economy of the city. Statistics showed that there were up to 10.23 million visits to the event sites during the festival, mostly attracted by the light artworks.

The festival was an outcome of government-enterprise cooperation: it was hosted by the Urban Administration and Law Enforcement Bureau of Shenzhen Municipality together with the people’s governments of Futian, Luohu, Nanshan, Yantian and Bao’an, and mainly organized by IDG World Expo China Co.,Ltd. with strategic support provided by Shenzhen International Investment & Promotion Association (SZIIPA).

Art meets technology in the city

According to the Urban Administration and Law Enforcement Bureau of Shenzhen Municipality, the festival is a successful one. The international and diversified artworks integrated technology into art, representing the enthusiasm and value of the city and giving full play to its advantages in design, technology and innovation.

Radugadesign, an artist team from Russia, pointed out that allowing more works of light art to decorate a city’s public space is a way to show respect to art and care for its citizens. "Hopefully the light art pieces are not for just a temporary exhibition or festival, but will be installed in Shenzhen’s public areas for a longer period or even permanently", they said.

ENESS, a team from Australia, said combining art and technology can change people’s life and unleash the potential of urban public space. Tech-based art can not only provide inspiration for landmarks in public areas, but also encourage people to understand urban life from a new perspective.

UFO Media Lab was one of the Chinese teams that participated in the festival. They appreciated Shenzhen’s open, inclusive attitude towards new forms of art. Besides, Shenzhen’s fast-growing technology can help flourish the creative potential of artists.

IDG ASIA Accelerator, which was responsible for the overall planning and operation of this festival, utilized IDG Group’s advantages in capital, exhibition and the press to make the festival not only possible but successful. During the festival, it fostered nearly 1000 enterprises in various fields including new media, technology, the cultural and creative industry, and art. Zhu Dongfang, President of IDG ASIA, expressed his hope that GLOW SHENZHEN 2020 can play an exemplary role in the integration of "technology + art" and bring citizens unprecedented interactive experience of technology and art.

GLOW SHENZHEN 2020 was not only a light festival carried by "tech-based art" but also an important platform to promote the development and integration of culture, art and night economy. The event sites dotted the major public space and business areas in five districts of the city. According to statistics, during the festival related business circles saw a remarkable increase in the number of customers at night as well as the sales volume. Some business areas even achieved a year-on-year increase of 166% in the number of visits.

High-quality public art events have gradually become a must in urban residents’ life and will substantially drive the development of business circles, said a business circle manager. Such events requires both creativity and support from the art industry.

According to the Commerce Bureau of Shenzhen Municipality, at present there are more than 17000 state-level high-tech enterprises in Shenzhen. "We hope that these enterprises can take full advantage of technology innovation and industrial chain and enter the international arena via the channel of light art."

Qiu Zhijie, Dean of School of Experimental Art, Central Academy of Fine Arts, believed that the biggest benefit of this festival to Shenzhen, besides promoting people’s leisure life and the city’s night economy, lies in the reshaping of people’s mind. An open and innovative mind is an inherent part of Shenzhen and a gift to China and the world.

Looking into the future, Qiu hoped that the next GLOW SHENZHEN can present not only works that are able to be appreciated and spread by the public but also works of high artistic value—the echoes of which can be heard. In addition, there should be explorable practice of art with sufficient elements of technology. "Only this kind of art festival will bear the contemporary value and historical significance."

The Urban Administration and Law Enforcement Bureau of Shenzhen Municipality expected that Shenzhen can continue to host innovative light art events in the new wave of technological revolution to build a tech-based art IP with Chinese characteristics. It is hoped that the IP will blossom in the Guangdong-Hong Kong-Macao Greater Bay Area and enjoy prestige in the world.