TAIPEI, Oct. 10, 2022 /PRNewswire/ — With the arrival of AMD’s Ryzen™ 7000 series desktop processors based on the new Zen 4 architecture, the world’s leading computer brand, GIGABYTE today announces its B650E and B650 motherboards ready to power these next-gen CPUs. Sporting the new AM5 socket, the AORUS B650E and B650 gaming motherboards are equipped with a direct digital power design and a full-covered cooling module to keep the circuitry cool. These AORUS motherboards come with PCIe 5.0 connectivity and support for DDR5 memory, which are AMD EXPO™ and Intel® XMP capable of up to DDR5-6600 and beyond. The AORUS gaming motherboards are also equipped with the DIY-friendly PCIe and M.2 device fast installation and removal design, making future upgrades quick and easy. 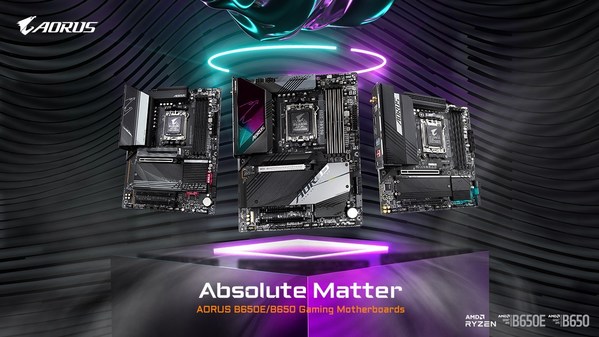 Power delivery and thermal design have always been the top factors when it comes to CPU performance. To meet the needs of gamers looking for powerful yet stable system performance, the AORUS B650E and B650 gaming motherboards are designed with a maximum 16+2+2-phase twin digital power, covered by a massive heatsink that has four times more surface than the previous generation to ensure the smoothest power delivery even under loads. Other thermal designs, such as 8mm mega-heatpipes and dedicated heatsinks on key components, greatly improves the system’s stability and overall performance. With the friendly design of PCIe and M.2 EZ-Latch features on the AORUS B650 gaming motherboards, GIGABYTE makes components swapping a whole lot easier.

All customers in North America region purchasing new GIGABYTE AORUS AMD AM5 series motherboards will receive an automatic extended 2-year warranty, expanding from the leading 3-year warranty to a total of 5 years.