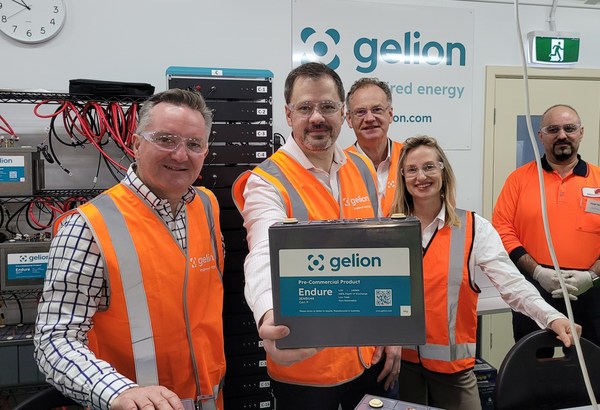 Gelion’s non-lithium battery lasts for 6 to 12 hours, and will be critical in replacing fossil fuel-produced energy on the grid by providing new storage options for a higher percentage of renewables. In the future, Gelion could scale its facilities to gigafactory level and create thousands of direct and indirect jobs.

Gelion partnered with Battery Energy at their lead-acid manufacturing site in Fairfield to accelerate speed to market, with the battery designed to fit standard lead acid racks, and its manufacturing line utilising 70 percent of existing lead-acid battery processes.

The global battery market is expected to reach $265 Billion by 2026 but there are currently significant challenges with unsustainable, unreliable, or risky global supply chains, including a dependence on finite rare-earth materials and a predicted global lithium shortage.

Tests performed on the first batch of Gelion batteries have shown their performance meets customer requirements, and the batteries will be supplied to the Acciona Energia solar plant in Narrava, Spain to potentially become part of Acciona’s supplier portfolio as a renewable energy storage provider.

The Acciona Energia deal is just one of many in Gelion’s pipeline – Gelion is in advanced discussions with multiple global customers in the energy, resources, mining, and oil & gas sectors for trials and offtakes. Gelion and Battery Energy are also experiencing significant interest from Australian customers and industry looking to decarbonise and improve energy security.

According to Gelion, this ability to create scalable onshore production facilities that can assist Australia’s energy transition, and which produce sophisticated exportable products from Australian technology and industrial know-how, is absolutely critical to securing Australia’s sovereign manufacturing capabilities.

Hannah McCaughey, CEO of Gelion, said: "We are delighted to be launching production of our breakthrough battery, proving it can be produced at scale with existing lead-acid battery manufacturing processes. Our game-changing technology will now be deployed to Acciona to support its development of renewable battery systems. This milestone is a significant step forward in Gelion’s growth strategy and also strengthens our position in the rapidly expanding energy storage market."

According to Hon Chris Bowen MP: "This is a great day for Gelion, starting the first industrial production line for their new Endure Battery, right here in Fairfield, the industrial heartland of Sydney. This is what Australian innovation is all about; cutting-edge technology and new manufacturing opportunities, which means more well-paying local jobs and upskilling in the workforce."

Gelion ("gel: ion", www.gelion.com) is a global renewable-energy storage innovator. By designing and manufacturing the world’s best batteries for stationary and mobile energy, we support the transition to a sustainable economy while delivering value for customers and investors.

Gelion has developed patented technology for a breakthrough zinc-bromide battery to support the transition to a carbon neutral economy by 2050. The technology is a low-cost, robust, safe and recyclable alternative to lithium-ion and lead-acid batteries making them ideally suited for the expanding energy storage market.

Gelion’s zinc-bromide gel battery uses non-flow technology, which is scalable, can deliver 100% depth of discharge and has a higher temperature tolerance and longer duration discharge than competing lead-acid and lithium-ion batteries. With applications at grid scale as well as in agriculture, mining, water management and irrigation the battery is also highly adaptable for off-grid use.

Gelion was spun-out from the University of Sydney in 2015 by Professor Thomas Maschmeyer, one of the world’s leading chemists, Fellow of the Australian Academy of Science and recipient of the Australian Prime Minister’s Prize for Innovation 2020, that country’s highest honour for scientific entrepreneurship.

The Company’s ESG credentials are strongly aligned to six of the UN’s 17 Sustainable Development Goals.

Gelion’s shares are listed on the AIM market of the London Stock Exchange and it received the Green Economy Mark at IPO in November 2022 recognising its commitment to energy transition.