SINGAPORE, 16 March, 2022 /PRNewswire/ — Funding Societies (also known as Modalku in Indonesia), Southeast Asia’s largest SME digital financing platform, announces its Employee Stock Option Plan (ESOP) buyback for existing and former employees worth US$16 million. The ESOP buyback marks the fourth time this activity has been conducted by the FinTech platform. Prior, employees and company alumni have cashed out US$3.5 million worth of ESOP shares. 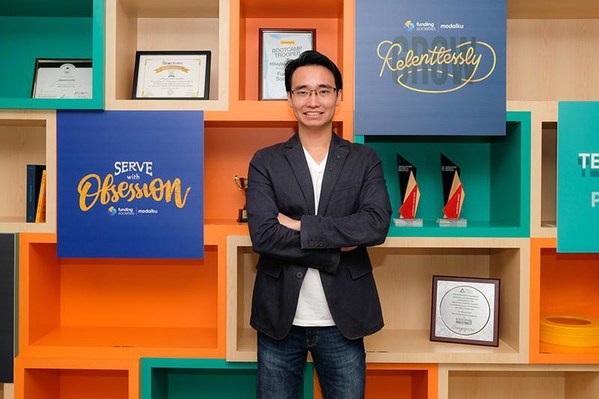 Funding Societies’ ESOP policy was designed for inclusivity and equality. Under the buyback scheme, all eligible former and current employees would have a right to sell their shares at no discount to the Series C+ preference share price to incoming investors, as compared to the customary 20% discount in industry. Employees may also choose to keep their ESOP or convert their vested ESOP into shares, effectively becoming company shareholders.

Many Funding Societies employees are eligible for the ESOP policy, including new hires. The company offers 50% of total annual salary in ESOP allotment for eligible new hires, leading the market and setting industry standards. Funding Societies also places strong emphasis on long-serving employees in its ESOP scheme. Eligible loyal employees are entitled to ESOP on every 2-year anniversary of joining the company. More than 120 current and former employees since Funding Societies’s inception received cash rewards from this share buyback.

Kelvin Teo, Co-founder and Group CEO of Funding Societies | Modalku, said, "Cliche as it may be, people are the center of Funding Societies | Modalku. We’re grateful for their faith and dedication to realise the vision of empowering Southeast Asian MSMEs, including that of our current team members, and especially from many founding team members in each country who are still with us, along with talent who have left us after an amazing stint, and people who have returned to us. We decided to buyback at no discount rather than the usual 20% discount, equating to a few millions more in cash payout, as a tangible way to thank our team. And I’m heartened when some team members shared about their first home with me from their ESOP gains."

He added: "Even before our Series C+ round, I am also pleased to report that 2021 saw the lowest employee attrition rate and the highest employee happiness scores since Funding Societies was founded. Despite the impact of Covid-19, we have taken deliberate steps to appreciate our team across various initiatives including internal communications, learning & development and ESOP, among others. Next, we want to do more to create a suitable working environment for parents. Specifically, we are taking steps to accommodate mothers by offering better family benefits and have launched part-time positions with more flexible working hours."

The announcement came just a month after the company’s C+ US$144 million equity funding round led by SoftBank Vision Fund 2 and other investors, including VNG Corporation, Rapyd Ventures, Asia-based global investor EDBI, Indies Capital, K3 Ventures, and Ascend Vietnam Ventures. The round also includes US$150 million in debt lines from institutional lenders across Europe, the United States, and Asia. Most of the raised funds will be utilised to propel company services for micro, small and medium enterprises (MSMEs) across Southeast Asia. A total of US$294 million was raised.

Funding Societies was founded in 2015 by Kelvin Teo and Reynold Wijaya out of Harvard Business School to empower MSMEs in Southeast Asia. The FinTech company solves MSMEs’ key pain points for growth, starting with the region’s US$300 billion financing gap. Funding Societies offers micro loans from US$500 up to US$1.5 million, which can be disbursed in as fast as 24 hours, answering in a timely manner to MSMEs who face the pertinent challenge of accessing business funds.

Funding Societies | Modalku is the largest SME digital financing platform in Southeast Asia. It is licensed in Singapore, Indonesia, Thailand, Malaysia, and operates in Vietnam. It is backed by SoftBank Vision Fund, SoftBank Ventures Asia, Sequoia Capital India, Alpha JWC Ventures, SMBC Bank, Samsung Ventures, BRI Ventures, Endeavor, SGInnovate, Qualgro, and Golden Gate Ventures amongst others. The FinTech company provides business financing to small and medium-sized enterprises (SMEs), which is funded by individual and institutional investors. In 7 years, it has helped finance over 5 million business loans with almost US$3 billion in funding. It was given the MAS FinTech Award in 2016, the Global SME Excellence Award at the United Nations’ ITU Telecom World in 2017, KPMG Fintech100 in 2018, Brands for Good in 2019, and ASEAN Startup of the Year by Global Startup Awards in 2020. In 2021, it was honorably mentioned as Responsible Digital Innovator of the Year by World Bank IFC SME Finance Forum and won the MAS ASEAN Fintech award for the second time.