PARIS, March 23, 2021 /PRNewswire/ — Bigo Live, one of the big names in live streaming, has announced that French rapper Morsay has joined its platform as a broadcaster to take French rap global.

Morsay (Bigo ID:718011256), whose real name is Mohamed Mehadji, is a multi-hyphenate rapper, producer, writer and actor. He rose to fame on Youtube in the late 2000s as part of a rap collective called Truands 2 La Galère, which Morsay had formed with his brother Zehef.

"I want to help entertainers affected by COVID. I want to create a community of rappers and facilitate exchanging ideas while making French rap known to the world. To do this, we need a global platform that provides authentic connections with fans and allows collaboration and interaction. This is why I chose Bigo Live," said Morsay. 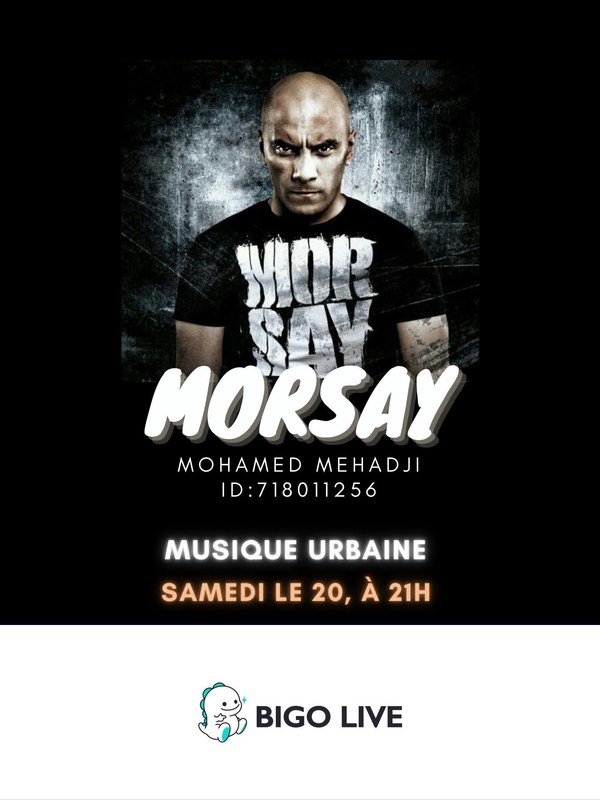 The COVID-19 pandemic has impacted all sectors, none more so than the artistic world. Social networks like Bigo Live are essential for artists to continue making a living doing the work they love and provide entertainment to those at home. With new platforms like Bigo Live, social media’s traditional barriers can be broken down, providing entertainers with greater opportunities to earn, interact with audiences, and collaborate with other artists.

Speaking on Morsay’s joining in Bigo Live, Morsay’s agent, Mr Nabil Amejad, said, "Social networks are a great way to counteract the isolation and disruption the industry and fans are facing. With its large, interactive global user base, Bigo Live can help rappers broaden their possibilities and reach more people. Especially through functions like the multi-room, which allow groups of fans to get together online just as they would offline."

Morsay’s move mimics numerous other artists and social media stars who are also moving to Bigo Live, such as the famous Kevin Razy, who announced his new Krazy Show, last month. Morsay’s first live event on the 20th of March attracted 4156 viewers at its peak.

Given Bigo Live’s rapid growth and wealth of features, it’s only a matter of time before more rappers both within France and abroad will discover the platform’s appeal and vast global audience.

Bigo Live is one of the world’s fastest-growing live streaming social communities where users can share, inspire, and interact in real-time with each other around the globe. The app is used by around 400 million users in more than 150 countries. Bigo Live is owned by Bigo Live Technology, which has enhanced global connections since 2014. Bigo Live Technology is headquartered in Singapore and has more than 30 offices and six R&D centres worldwide.