CHENGDU, China, Sept. 16, 2021 /PRNewswire/ — Qingbaijiang district in Chengdu, Southwest China’s Sichuan province, has achieved outstanding results in its support for the Belt and Road Initiative and regional economic development. It has done so by making full use of Chengdu International Railway Port. 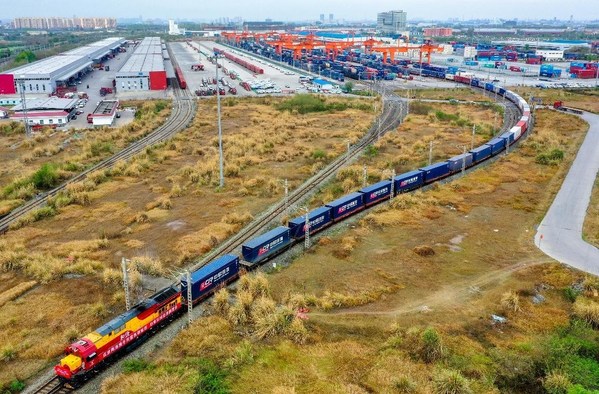 After starting operations in 2013, the China–Europe (Chengdu) Railway Express, departing from the railway port, now outperforms many of its rivals in China. It puts Chengdu at the forefront of opening-up among the country’s inland regions.

The port has built a Chengdu-centered international rail network that connects to Europe, Mongolia, Russia, Japan, South Korea and the Association of Southeast Asian Nations.

Trains departing from the port have traveled to 65 cities overseas, including Lodz in Poland and Nuremberg in Germany, as well as 20 Chinese cities.

In the first half of this year, the Chengdu route dispatched more than 2,800 freight trains.

The China–Europe freight train service is recognized as a major channel for connecting global markets thanks to its high efficiency and stability, which benefits more multinational companies than ever.

Since 2016, TCL Technology Group, a home appliance producer based in Huizhou, Guangdong province, has transferred part of its production capacity to Chengdu and delivered its products to Europe through the China–Europe freight train. In 2020, TCL chartered an average of two freight trains a week to haul its deliveries to Europe, equating to a total of more than 4,000 containers of products throughout the year.

As of last month, Sichuan-based manufacturer Changhong Group had chartered four trains to Europe this year, carrying smart home appliances such as refrigerators and LCD television components. The company will maintain a frequency of one or two dispatched trains a month.

On June 25, China’s leading television manufacturer Konka Group’s first delivery of TV sets was dispatched to Europe via the China–Europe freight train. Its export are estimated to consist of more than 200,000 units and total output value is expected to reach more than 100 million yuan in the second half of this year.

In 2020, the Chengdu route transported goods worth 150.7 billion yuan into and outside of China, strongly boosting foreign trade in Sichuan.

The next focus of Chengdu International Railway Port will be strengthening its role as a key land port and improving the international supply chain.