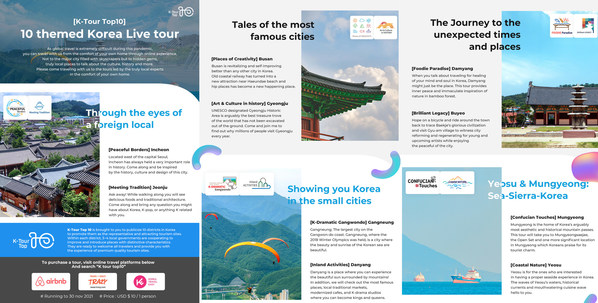 * The "K-tour Top 10" is a themed tour program that the MCST began offering in 2017 to introduce various Korean tourist attractions to people in Korea and overseas. The 39 cities selected for the program are grouped into 10 regions based on unique themes and stories.

Virtual tour participants can enjoy the dynamic local scenes from top-rated tourist attractions to local foods through video footages while aided by real time in-depth explanation of the tour hosts.

What makes the tours more unique is the fact that five travel enthusiasts who are also professionals in their own fields act as the tour hosts.

One of the hosts is Andreas Varsakopoulos, a Greek-American celebrity in Korea. He became famous by participating in Korean TV shows such as "Non-Summit" and "South Korean Foreigners" as a guest. He will serve as a tour guide in Incheon (included in PEACEFUL Borders theme along with Paju, Suwon, and Hwaseong) and Jeonju (included in Meeting TRADITION theme along with Gunsan, Gochang, and Buan).

Living in Korea for over nine years, he fell in love with Korean foods and people full of enthusiasm. He will tell stories in the eyes of a foreigner(https://www.airbnb.com/experiences/2805455), exploring local foods and buildings of the past and the present. His tour program will be live streamed from August 23rd to 25th.

Ahn Jae-Woo is a cultural planner, who worked in various countries of Europe and serving as a host in the TV show called "Hello, Gugak (Gugak means Korean traditional music)!" He will be the host of Yeosu (included in Coastal NATURE theme along with Suncheon, Boseong, and Gwangyang) and Mungyeong (included in CONFUCIAN Touches along with Daegu, Andong, and Yeongju) programs under the theme of "Sea-Sierra-Korea"(https://www.airbnb.com/experiences/2777420), showing blue ocean of Yeosu and green mountains of Mungyeong. The tours are available on August 11th, 23rd, and 25th.

Yun Sang-Yin, who majored in art history at the University of London and are working as a concert master, will host a tour named "The Journey to the Unexpected Times and Places"(https://www.airbnb.com/experiences/2805488) introducing Damyang (included in FOODIE Paradise along with Gwangju, Mokpo, and Naju) and Buyeo (included in Brilliant LEGACY along with Daejeon, Gongju, and Iksan). The tours are available on August 13rd, 20th, and 27th.

The 10 English-narrated virtual tours are available until November 30th on online travel platforms including Airbnb, Trazy.com and KoreaTravelEasy.com (1 hour; USD 10). Email to [email protected] to get more information about the virtual tour programs.