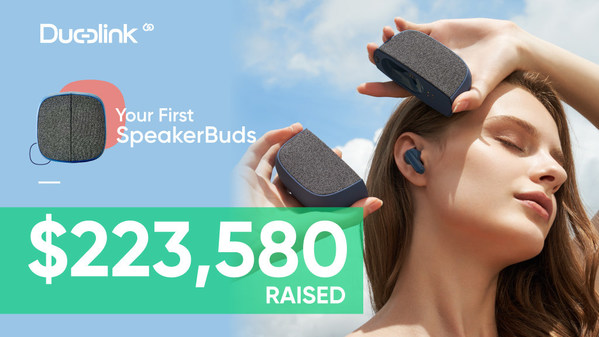 Aiming to create a new, innovative, niche category in the audio hardware market, Duolink SpeakerBuds attracted the attention of over 250,000 consumers from over 60 countries, with 2,100+ early-birds investing in the new earbuds, main and two stereo speakers device.

Thanks to Duolink SpeakerBuds offering those who crave better music experience with less gadgets their ultimate all-in-one device, the initial funding goal was reached just 11 hours after launch, before achieving a final funding total of four times the campaign’s investment target.

In total, Duolink raised $223,580 and, following that success, Duolink Go is now set to launch an official distribution channel via its own website for consumers to secure their own SpeakerBuds for the price of just $149.

For more information, and to buy Duolink SpeakerBuds, visit: https://duolinkgo.com/

Founded in 2018, Duolink Go designs adaptable audio devices for music lovers. Set up by Founder, Victor Liu, Duolink Go’s team of top-notch acoustic engineers aim to bring joy of music to the world through constant innovation. SpeakerBuds were developed as its flagship debut for the world to play and enjoy music in more than one way.