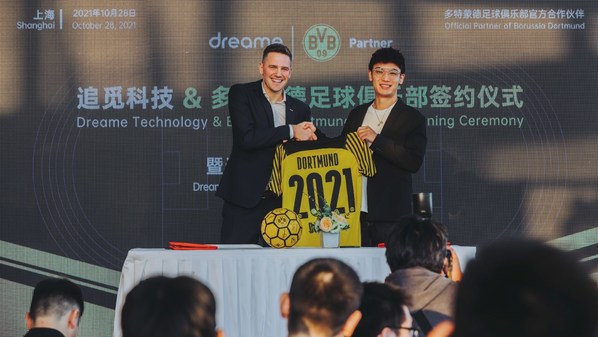 Borussia Dortmund is a German sports club based in Dortmund, North Rhine-Westphalia. With 270 million fans worldwide, BVB is ranked as the most powerful brand and the most likable club in Germany. The Dortmund team has won eight German league championships and five DFB Cups. In 1966, BVB became the first German club to win the European Cup Winners’ Cup and won the 1997 UEFA Champions League title.

Both Dreame Technology and BVB have made many significant achievements in their respective fields. The collaboration between Dreame and BVB not only represents a convergence between sports and technology, but also provides a chance for Dreame to better serve customers in the European market.

"We are excited about this opportunity to partner with Borussia Dortmund," said Frank Wang, International Marketing Director at Dreame Technology. "BVB’s impressive performance speaks for itself, and as a company that prides itself on the performance of our products, that is something we can deeply appreciate."

Dreame and Borussia Dortmund signed their agreement on October 28th at the highest bookstore in Shanghai. The signing ceremony commenced with Dreame’s Vice President, Wu Peng, and Borussia Dortmund’s Head of China, Benjamin Wahl, signing the agreement. As a symbol of the partnership, Dortmund Club gifted a BVB jersey with "Dortmund 2021" printed on the back, commemorating the year the partnership begins. The venue also featured a product experience zone for attendees to interact with some of Dreame’s most popular products and new releases.

"We look forward to embarking on a fruitful partnership with Dreame,” said Mr. Wahl.  ”Sharing the same challenger mindset, both BVB and Dreame strive for performance excellence with innovative approach. We are confident that the partnership will not only further expand Dreame’s brand awareness in Europe, but also create new opportunities for us in China and other markets."

Established in 2015, Dreame Technology is an innovative consumer product company that focuses on smart home cleaning appliances with the vision to empower lives through technology. Follow us on Facebook, Instagram, and Twitter. For more information, please visit: https://www.dreame-technology.com.

Borussia Dortmund is one of the most successful football clubs in Germany, as well as eight German Bundesliga titles and five German Cup victories, Dortmund has also won the European Cup Winners’ Cup in 1966, the Champions League in 1997, and also the Intercontinental Cup (FIFA Club World Cup) in that very same year. Furthermore, it is one of the five largest sports clubs in Germany and is the seventh largest worldwide.