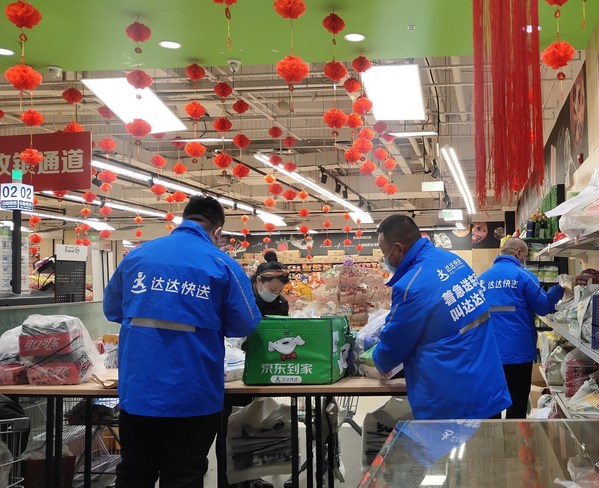 Chinese New Year is a traditional holiday that typically drives widespread travel as people return home for family reunions. This year, due to the COVID-19 pandemic, many residents have chosen to stay home and stay put. Instead of going out, consumers are placing orders for the festivities online to deliver to family, and Dada’s one-hour delivery is streamlining the process. JDDJ’s data shows that the number of orders that users placed from a city other than their own was twice that of the comparable period last year, led by Beijing, Shenzhen and Guangzhou.

During the reporting period, sales of festival gift boxes on JDDJ increased 3x compared to the prior year. Among them, sales of cookie and coffee gift boxes increased 4x and 3x respectively. Additionally, some western-style foods have increased in popularity as well. Compared to last year, sales of salad increased 40x on JDDJ, while sales of brandy increased 11x and pasta 4x. Milk, mushrooms, oranges, potatoes and chicken breasts were the top selling products on JDDJ during the Festival.

The report predicts that as more consumers place orders on local on-demand retail platforms represented by JDDJ, their consumption habits will include not only food, but all categories of products. Consumers have also been spending on games and entertainment to enjoy during the festivities. Sales of poker and mahjong doubled, and sales of mobile phones on the platform increased 20x year-on-year, with the iPhone 11, iPhone 12 and Huawei Mate 40 Pro being the most popular devices.

"Through our commitment to ‘bring people everything on demand,’ JDDJ consistently provides consumers in China with an extensive variety of products through the one-hour delivery service provided by Dada Now," said Philip Kuai, Founder, Chairman and CEO of Dada Group. "In January, Dada Group announced that JDDJ and Dada Now would stay open during Chinese New Year in February. Through these two platforms, we are proud to maintain the highest level of safety, while ensuring trustworthy and efficient services for customers across the country."