SEOUL, South Korea, Feb. 5, 2021 /PRNewswire/ — App Annie, an industry-trusted mobile data and analytics platform, announced the list of the world’s top publishers through the Level Up Top Publishers Awards of 2021. 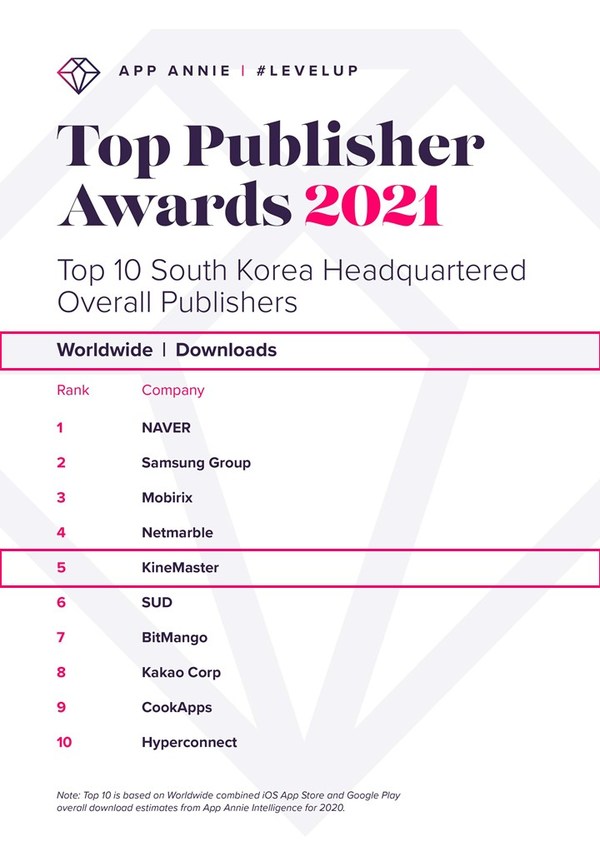 KineMaster was ranked No.5 in terms of global downloads in 2020 among Korea’s Top Mobile, followed by Naver, Samsung, Mobirix, and Netmarble.

KineMaster, the mobile video editing app company, was ranked No.5 in terms of global downloads in 2020 among Korea’s Top Mobile, followed by Naver, Samsung, Mobirix, and Netmarble.

In 2020, billions of people went online to keep in touch with others, play games, and relied on mobile platforms to find new sources of fun due to COVID-19. The latest top publishers’ awards reflects the year’s mobile trend precisely, placing gaming and streaming publishers at the top of the chart.

KineMaster saw its year-on-year third-quarter 2020 cumulative download numbers soar 92%, while the number of monthly active users and subscribers rising 104% and 155% during the same period. This rapid increase shows how the company keeps gaining in the mobile video editing app market. KineMaster continues its efforts to expand its user base by developing supporting apps to enhance its user’s satisfaction and editing capabilities as well as by launching a variety of trendy asset contents.

KineMaster Corporation has been one of the world’s leading multimedia software vendors for over 18 years. By combining state-of-the-art technologies in video & audio codecs, streaming protocols, media containers, and post-processing, KineMaster Corporation provides a video editing app and a top-quality media player optimized for mobile devices. KineMaster is a publicly traded company listed on the Korean stock exchange (KOSDAQ:139670) since December 2011, with its headquarter in Seoul, Korea.