In the past six months, CrediMart booked a staggering GMV growth of 37.5 times with more than 60,000 wholesalers and retailers joining the platform.

JAKARTA, Indonesia, June 7, 2022 /PRNewswire/ — CrediMart is one of CrediBook’s two flagship products aimed at wholesalers. The company, which was born out of a digital bookkeeping app, recently received $8.1 million Series A funding from Monk’s Hill Ventures with the participation of Insignia Ventures Partners and Wavemaker Partners. 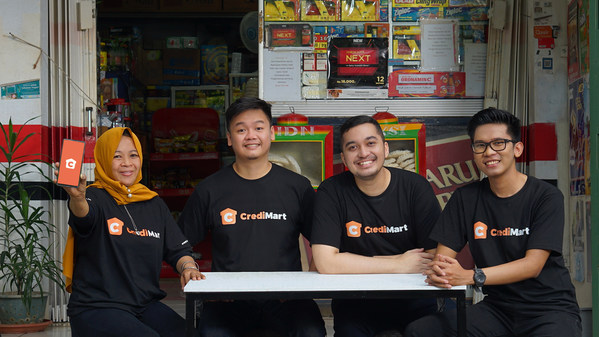 CrediBook’s founders with CrediMart customer (left). The start up recently closed its $8.1M Series A funding.

Gabriel Frans, CEO, and Co-Founder of CrediBook explained that the funding would expand CrediMart as the product has seen an oversized product-market fit.

"In six months after inception, CrediMart recorded a significant GMV growth of 37.5 times with more than 60,000 wholesalers-retailers joining the platform. It showcases the need for digitalization on wholesale-retail transactions in Indonesia," said Gabriel.

CrediMart is attempting to replicate the success of Faire, an online B2B wholesale marketplace based in the US that has bagged $1 billion in funding and is currently valued at $12,4 billion.

Monk Hill Ventures has pointed out Indonesia’s massive $260 billion markets for non-agricultural MSMEs as their main decision to invest in CrediBook. However, wholesale-retailer transactions, which are most of the market, are inefficient and lacking the digital aspect in its operations.

The majority of wholesalers in Indonesia still sell their products conventionally in offline stores. Other than the uncomfortable experience of customers in the store due to the long queues, the pandemic has also caused the drop of offline sales by approximately 20 percent as mobility was restricted.

The CrediBook bookkeeping app for wholesalers was enhanced to solve this problem firsthand, as they make up the majority of the active users.

"Wholesalers want to sell online but don’t know how to do it and are not sure if it’s an effective way to increase sales. This is where CrediMart comes in," he said.

CrediMart managed to gain the wholesaler’s trust in collaborating as they were able to bring vast amounts of orders coming from retailers shopping online through the CrediMart marketplace. Currently, they are partnering with over 50 conventional wholesalers across several product categories such as FMCG, building materials, OTC medicines, stationery, fashion and non medical masks.

"We are here to help wholesalers to fulfill the retailer orders on our online marketplace from our conventional wholesaler partners. That’s why we are not partnered with brand principles because we do not aim to replace wholesaler’s roles in the traditional supply chain," said Gabriel.

In addition, CrediMart also provides a buy-now-pay-later payment scheme and next-day delivery service for retailers. Most conventional wholesalers were unable to deliver before partnering with CrediMart.

With the large variety of product categories still untapped, CrediMart sees a massive opportunity in the wholesale industry with their category-agnostic products. Wholesalers too, stand to gain benefit from it by selling any products that are not limited to daily essentials or FMCG.

Because of their rapid growth, CrediMart is planning to expand its services across Indonesia, mainly to Bali, Nusa Tenggara, and Sumatra. Furthermore, they are aiming to collaborate with more segments from different verticals to add to their product categories from household products, to food and beverages.

Currently, CrediMart has on-field sales representatives in over 40 cities in Indonesia, to educate retailers how to shop online in their platform and maximize their experience using CrediMart.

While aiming to grow fast, Gabriel will be all eyes on the company’s unit of economics. "We will always be an asset-light company, operating without warehouses to store products, for example," he concluded.