TAIPEI, June 25, 2021 /PRNewswire/ — The long wait has finally come to an end for Xbox players. After introducing various fighting board (for fight stick) supporting consoles, Brook now proudly presents a new fighting board designed for Xbox players: the XB Fighting Board, a fighting board that supports ALL Xbox series consoles, along with Brook’s first adoption of its exclusive Brook ACT (Arcade Configuration Tool) software, allowing players to effortlessly switch between multiple key configurations and Conquer ALL Xbox consoles. 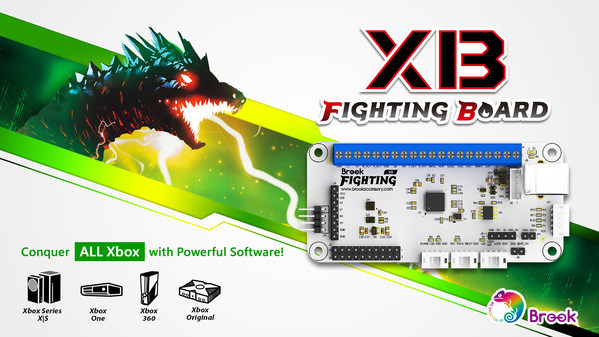 Brook has released numerous fighting board series products supporting Xbox 360, Xbox One, and Xbox Series X|S, as Brook’s fighting board series earned popularity among gamers. With the spirit of always being at the gamers’ service and providing continuous updates, Brook is now releasing a new generation of fighting board exclusively for the Xbox series, the XB Fighting Board, supporting even the original Xbox seamlessly and allowing players to relive their memories of best-selling classics like Dead or Alive 3 on Xbox Original, as well as Virtua Fighter 5, Tekken 7, Mortal Kombat 11 Ultimate on multiple Xbox platforms. Players can now fight back in time, just like the good old days.

XB Fighting Board is also Brook’s first fighting board to adopt ACT. As a cross-console fighting board, XB Fighting Board put extra focus on the operation experience when users switching between different consoles. Based on more than 2 decades of experience, Brook developed an exclusive Brook ACT software, enabling the fighting board to save up to 4 key configurations for each console. Players can set up different key configurations based on consoles, games, and scenarios, bypassing all the troubles of setting up for another console.

Trusted by professional fighting game players around the world, Brook ensures that every part of the design is in full compliance with the rules of eSport fighting game tournaments. In addition to the built-in SOCD Cleaner that makes all-button fight sticks compliant to tournament rules, Brook also introduced key locks to avoid false triggering. Players can now pay full attention to the tournament without worrying about interference caused by the equipment, and utilize the Brook fighting board with its well-known exclusive tech for the lowest control delay in the market, to gain victory in their every battle.

Brook is a gaming accessory brand from Taiwan with more than 20 years of experience in designing and manufacturing gaming hardware. In 2015, Brook released their first super converters for gaming consoles which allow your older gamepads and other controllers to adapt seamlessly to new consoles. Since we believe every gamer should enjoy the game any way they want, our team is dedicated to delivering solutions for every gamer’s wish.
#YourGameOurPlay