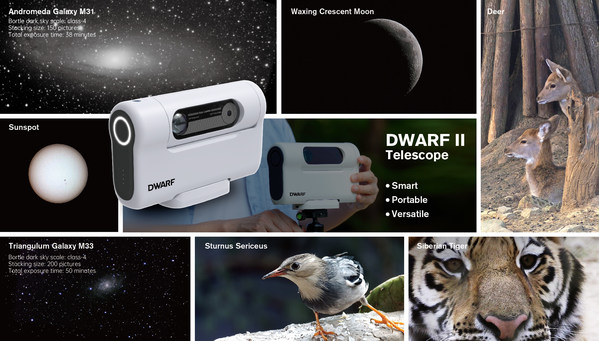 "Digital telescopes allow people to record wonderful images beyond limits of vision, such as the starry sky and dynamic moments. However, the traditional telescopes are user-unfriendly and complicated, leaving many interested or potential consumers being deterred outside." Qinglei Hu, the founder of the DWARF team, said.

"We are committed to making the telescope a popular and practical photography tool through digital technologies such as edge computing, deep learning, and machine vision," Hu Added.

The DWARF II is only as big as a common dictionary, and its small size is due to its periscope structure, creating a folded and compact optical path. Furthermore, the overall moment of inertia is significantly decreased, lowering the torque requirements of the motor and allowing the use of a smaller motor. Measuring in at just 204x62x130mm3 and weighing just 2.4 lbs/1.1 kg; the DWARF II is easy to pack and bring around.

Users can use their mobile phones or tablets to connect to DWARF II via Bluetooth/Wi-Fi for control. With the 2-axis pan-tilt capability, the telescope’s direction, as well as the frame for shooting and recording, can be independently controlled, avoiding jitters during the process.

As the Earth rotates around the polar axis, it causes motion blur under long exposures. Polaris alignment is necessary for rotation compensation for traditional telescopes, which is a difficult task to accomplish. The DWARF II uses an image-driven algorithm, StellarRoute, which enables adaptive attitude calibration without Polaris alignment.

StellarRoute can also perform adaptive path planning to achieve one-click GOTO. The user only needs to select the star to be photographed in the app, and the DWARF II will automatically align itself at the target.

Object tracking for the DWARF II is achieved through multiple deep learning networks. Select the target object through the DWARF App, start the tracking function, and the smart telescope will automatically rotate to track the target object. The maximum angular velocity of the track is 36°/s, and even birds and aircraft can be tracked.

The DWARF II has both a wide-angle and a telephoto camera, and users can preview two camera fields in the DWARF App. The telephoto field of view (FOV) is just in the center of the wide-angle FOV, assisting users to achieve precision. There is also an advanced feature in the dual-camera system: when the user clicks on a target in the wide-angle FOV, the DWARF II will automatically point to the target object in the telephoto FOV, which makes it efficient and easy for you to capture an object.

The panoramic feature makes it simple for photographing landscapes, but it can be challenging to record details, and traditional telescopes can record details but have limited visual fields. The DWARF II captures multiple images with 2-axis scanning and then uses algorithms to stitch them into a gigapixel panoramic photo. You can not only appreciate the whole scenery but also enjoy the minute details captured.

Having raised more than $1.5 million on Kickstarter and Indiegogo, the DWARF II is still available for interested consumers via Indiegogo, with Super Early Bird prices starting at $359.

The DWARF App will launch alongside shipments in August 2022.

About DWARF
The DWARF team comprises a group of geeks who are passionate about optics, computers, and robotics, and they are committed to using cutting-edge interdisciplinary technologies to bring imaginary products into reality together with users.