SEOUL, South Korea, Oct. 11, 2022 /PRNewswire/ — CLASSUM, which powers an interactive learning platform for corporations and universities, has completed its $11 million pre-Series B funding. The investment was led by venture capital firm Dunamu & Partners with participation from Silicon Valley based Storm Ventures and Big Basin Capital, along with South Korean based VC Pearl Abyss Capital. 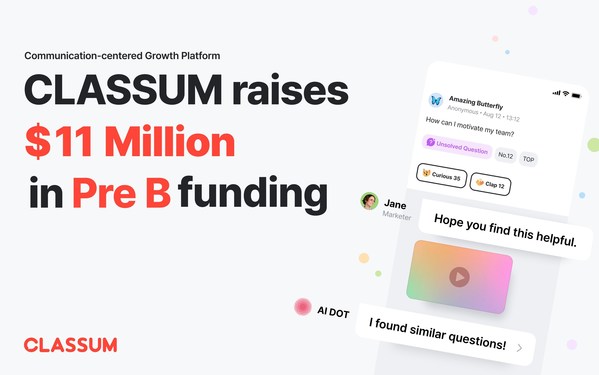 Founded in 2018, CLASSUM is currently used by more than 6,000 organizations across 32 countries. In South Korea, where the company was started, CLASSUM is used by the top tier educational institutions such as Seoul National University, Korea Advanced Institute of Science and Technology (KAIST) and Yonsei University. The company is also widely adopted by multinational corporations such as Samsung Electronics, LG Academy, Prudential, Shiseido, and World Vision.

"We are excited to have completed our latest round of funding. Disruption is imminent in the education industry, and we believe key stakeholders are ready and willing to adopt new technology to enhance the overall learning experience," said CLASSUM Co-founder and CEO Youjin Choi. "We plan to use this new financing to aggressively expand our foothold in the enterprise learning market and scale our presence across more key geographies."

Adding his support following the latest funding, Dunamu & Partners CEO and managing partner Ryan Lee said "We were impressed by CLASSUM’s customer centric product which has received strong endorsement by both the education and corporate sector alike. The educational software scene is ripe for transformation, and the unparalleled pace at which CLASSUM is closing new sizeable contracts is a testament to the market opportunity that the company can capture going forward."

The $11 million round announced today follows the $6 million Series A round in 2021, led by Pearl Abyss Capital, Storm Venture, Big Basin Capital and Smilegate Investment.

Established in 2018, CLASSUM provides an interactive learning platform for corporates and universities. Provided as a Software-as-a-Service (SaaS) model, CLASSUM enables active communication and engagement from participants. CLASSUM enables learners and educators to maximize their communication and engagement by supporting social media-based communicating features and selective anonymity among participants to minimize barriers in Q&As and sharing knowledge. In addition, the service also uses Artificial Intelligence (AI) to curate FAQs, as well as provide data driven insight into the dynamics of each learning environment. CLASSUM has also partnered with leading platforms including Zoom, Gather, Kahoot! and Padlet to incorporate interactive and collaborative learning experiences both on and offline.