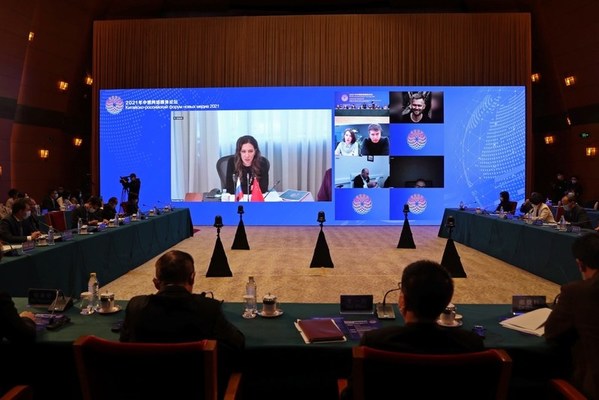 The 2021 China-Russia Internet Media Forum is held online via video link as well as offline at venues in Beijing and Moscow, on Nov 22. [Photo by Wang Zhuangfei/chinadaily.com.cn]

Chinese and Russian internet media outlets should promote multilateralism, combat false information, safeguard equity and justice in cyberspace, and contribute more to the friendly ties between the two countries, a forum was told on Monday.

The 2021 China-Russia Internet Media Forum, with the theme of "Promoting Exchanges and Mutual Learning, Deepening Practical Cooperation", was held online via video link as well as offline at venues in Beijing and Moscow.

Niu Yibing, deputy minister of the Office of the Central Cyberspace Affairs Commission, said that since the outbreak of the COVID-19 pandemic, the internet has played an important role by assisting the recovery of the global economy, restoring the normal functioning of society and promoting international cooperation in fighting the pandemic.

The internet media of the two countries should firmly practice and promote the concept of multilateralism and jointly safeguard the international cyberspace order, Niu said. They also should safeguard equity and justice in cyberspace and contribute to the development of bilateral relations as well as cooperation in various fields, he added.

Niu said that the environment of global public opinion is becoming increasingly complicated, with ideological bias, power politics and false information bringing new challenges to global communication. The internet media of China and Russia should work together to make voices heard on major international and regional issues, fight false information and amplify the voice of justice, truth and rationality, he said.

Bella Cherkesova, Russian deputy minister of digital development, communications and mass media, said that internet media of both countries should strengthen communication and disseminate objective and truthful information in a timely manner, so that they can meet the information demand of people in both countries.

She added that as the internet has developed rapidly and penetrated people’s everyday life, it is important for internet media and the internet industries of China and Russia to work together to ensure the security of cyberspace. Moreover, media outlets need to be alert to false information and false news, which have become widespread since the onset of the pandemic and have caused much damage.

Zhou Shuchun, publisher and editor-in-chief of China Daily, said that over the past five years, driven by the China-Russia Internet Media Forum, Chinese and Russian internet media outlets and internet industries have achieved fruitful results of cooperation. Nearly 30 media outlets from both countries have cooperated, exchanging more than 100,000 articles of various kinds.

"From content cooperation and personnel exchanges to industrial integration, … the online media and internet industries of both countries have demonstrated with concrete actions the high level of China-Russia comprehensive strategic partnership of coordination," he said.

The forum, the fifth of its kind, was co-hosted by China Daily and the China Internet Development Foundation.

Internet media outlets of China and Russia also reached a consensus during the forum, pledging to focus on the common interests of the two countries, tell stories of bilateral friendship and deepen cultural exchanges, in order to enhance mutual trust between China and Russia.