— A news report from chinadaily.com.cn on China’s High-speed rail

BEIJING, Nov. 24, 2021 /PRNewswire/ — High-speed rail (HSR) is an important indicator of the modernization of a country’s transportation and a significant reflection of its level of industrialization. Despite developing HSR more than four decades later than some developed countries, thanks to the tireless efforts of several generations of railway workers, China has made historic progress in HSR, from trailing other countries, to keeping pace with the competition, and to leading the world.

China has built the world’s largest and most modern HSR network.

Since the Beijing–Tianjin intercity railway – China’s first train line with a design speed of 350 km/h – was completed in 2008, dozens of HSR routes have been completed and gone into service. After the 18th CPC National Congress in 2012 in particular, the development of HSR moved onto fast track, with average annual construction of 3,500 km of railway. Both the speed and quality of this construction have received global acclaim.

– China has the longest operational HSR network in the world.

– China has the fastest commercial railways in the world.

China’s Fuxing trains operate at a speed of 350 km/h on 1,910 km of HSR lines, including the Beijing–Shanghai, Beijing–Tianjin, Beijing-Zhangjiakou, and Chengdu–Chongqing routes. China is the only country in the world with commercially operated HSR trains that travel at 350 km/h. The country’s HSR network stretches from northeast forests and snowy plains to the Yangtze River Delta in the south, from the northwest Gobi Desert to the eastern coast of the East China Sea, traversing rivers and mountains to reach every corner of the country. The HSR system was originally designed along four major north-south routes and four major east-west routes, but is being expanded to create a dense network of routes based around eight major north-south routes and eight major east-west routes. The system already covers 92 percent of Chinese cities each with a population of more than half a million.

China has a complete HSR technology system consisting of three main areas: engineering construction, equipment manufacturing, and operations management. Its HSR technology is at the global forefront, and has become a world leader in a number of fields, making the significant transition from straggler to pacesetter.

Due to China’s complex and diverse terrain and climate, construction of the HSR network has required overcoming some of the world’s most difficult technical challenges, including in the areas of railway foundations, tracks, long and large bridges and tunnels, mass transit stations, and system integration. With the focus on original innovations, China has developed a complete set of technologies for the construction of HSR under varied geological and climatic conditions. These achievements include the construction of the Shanghai-Sutong Yangtze River Bridge and the Wufengshan Yangtze River Bridge, both of which have main spans exceeding 1 km; six world-class HSR bridges each with a span exceeding 500m, including the Tianxingzhou Yangtze River Bridge in Wuhan; more than 100 HSR tunnels over 10 km in length, including the Shiziyang Tunnel on the Guangzhou–Shenzhen–Hong Kong express rail link and the Qinling tunnels on the Xi’an-Chengdu HSR route; and many modern HSR hub stations, including Beijing South, Shanghai Hongqiao, and Guangzhou South. In recognition of these feats, several HSR bridges and tunnels have won the industry’s highest awards issued by the International Tunnel and Underground Space Association (ITA-AITES) and the International Bridge Conference (IBC).

Following the introduction of advanced technology from abroad, China jointly designed and built the Hexie bullet (also known as electric multiple unit (EMU)) train with its partners. Then, after persevering with independent innovation, China broke through technical bottlenecks to develop the world-class Fuxing Chinese Standardized EMU, featuring completely independent intellectual property, which includes the Fuxing Intelligent EMU model, the world’s first train capable of automatic operation at 350 km/h. China has developed a range of Fuxing train products at different speed grades in the range of 160-350 km/h, which can be adapted to operate in harsh environments, such as plateaus, extremely-cold areas, high winds, and sandy conditions. To meet the unique requirements of HSR, China independently developed the CTCS-3 control system and built a dispatch control system using SCADA, giving the network a powerful, safe, and reliable central nervous system and power supply system. Other advanced technologies, such as the BeiDou Navigation Satellite System, 5G, and big data, have been successfully applied to HSR.

China has mastered the full gamut of HSR operations management technologies despite the complexity of the rail network. It has created scheduling technology for high-density, cross-line (running on HSR and conventional rail) routes operating at different speeds. The system has overcome the difficulties posed by operating various EMUs and speed classes over long distances and across line types to offer high-density public transportation on busy high-speed main lines and intercity railways, with departure intervals of just 4-5 minutes at peak times.

Safety has been boosted with the help of science and technology. The Fuxing Intelligent EMU has more than 2,700 monitored points, and features in-transit self-awareness, health management, and fault diagnosis technologies, which provide comprehensive real-time monitoring of train operations. China has also developed online monitoring systems for HSR equipment, including high-speed inspection vehicles and on-track detection and sensing devices, which use big data analysis to precisely control HSR infrastructure. Natural disasters and public security risks are mitigated thanks to the development of natural disaster (including wind, rain, and snow) monitoring equipment as well as foreign object intrusion and earthquake monitoring and early warning systems.

With the focus on realizing people’s desire for a better life and reforming the supply structure of transportation in China, a passenger transportation quality improvement plan and Fuxing brand strategy have been implemented to improve the all-round experience and operations of HSR.

China’s HSR puts safety first and focuses on quality in every aspect of construction and operations management. It implements a program of "creating solid foundations, meeting standards, and raising quality and efficiency," as well as a three-pronged security system consisting of human, material, and technological defenses, which enables comprehensive management of the external security environment of HSR and ensures the safety and reliability of the network. As of the end of June 2021, China’s HSR system had safely travelled 9.28 billion km, equivalent to 232,000 laps around the Earth, and safely transported 14.12 billion passengers.

As part of the operational efficiency of the HSR network, train timetables are dynamically altered each day of the year to optimize HSR supply, allowing the number of trains operating to grow and their coverage to expand. At present, the national railways operate an average of more than 7,400 HSR trains per day, accounting for 77 percent of all passenger trains. A report issued by the World Bank in 2019 stated that passenger density on China’s HSR services is about twice the density of HSR in Europe.

China’s HSR lines are constructed from ballastless track, with heavy-duty superlong steel rails and seamless tracks, for an extremely smooth ride. The Fuxing EMU features high-speed bogie with excellent damping performance, ensuring low vehicle vibration acceleration, amplitude, and noise, and meeting the highest international standards for onboard stability. Technical issues related to train aerodynamics, wheel-rail contact, and train airtightness have been addressed to improve safety and comfort when trains enter and exit tunnels and pass each other at high speed. The on-board air conditioning system provides fresh air at a rate of 16 m³ per person per hour, which is 7 percent-60 percent higher than the HSR trains of other countries. The carriages are wide and spacious, with a cross-sectional area of 11.2 m², which is 14.3 percent larger than other countries, offering passengers a more comfortable travel environment. 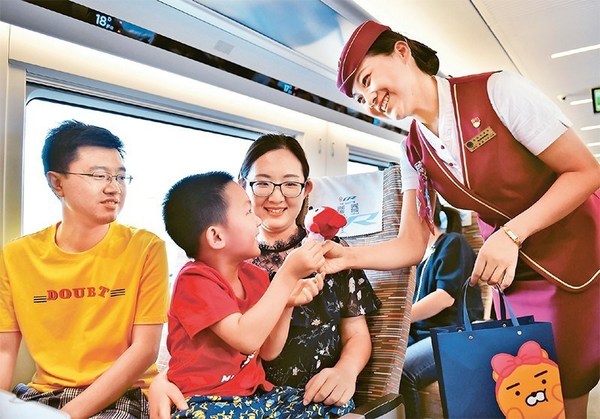 An attendant interacts with passengers on a high-speed train. A whole raft of services including electronic tickets, online meal ordering, quiet carriages, and smart interfaces have been launched on China’s high-speed rail network, providing passengers with a safe, comfortable, and convenient travel experience.

China has built the world’s largest online railway ticketing system (known as 12306), which has the capacity to sell up to 20 million tickets each day. Currently, 86.2 percent of tickets are sold online, with the single-day record at 90 percent. The launch of the 12306 platform has facilitated e-ticketing, mobile payments, online seat selection, entry into stations using facial recognition, and pre-order meal services. Traditional services, such as paper ticketing and station ticket sales windows, have also been retained for the sake of the elderly and non-Internet users, all of which has significantly improved the quality of service on China’s railways.

The World Bank’s 2019 report stated that even though many Chinese HSR lines have a high proportion of their route on viaducts or in tunnels, the Chinese network has been built at only two-thirds the average cost in other countries, and the economic rate of return is positive, giving reason to be optimistic about the long-term economic viability of the major trunk railways.

(This article is an excerpt from "Building China’s Impressive High-Speed Rail", by Lu Dongfu, Chairman of the Board of China State Railway Group, originally appeared in Qiushi Journal, English edition, No. 5, 2021)