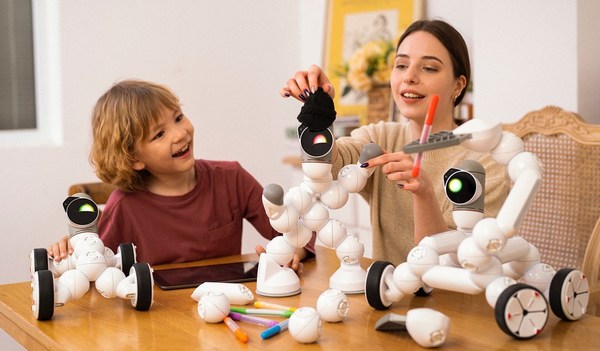 "The funds from the Series B financing will be used to build a developer ecosystem and develop new products. The close partnership with Xiaomi allows KEYi Tech to develop robots by combining its advantages in robotic technologies and consumer robotics with Xiaomi’s competence in artificial intelligence (AI) technologies and channel supply chain," said Yang Jianbo, founder and CEO of KEYi Tech. "We look forward to delivering a superior Metaverse robotics experience to consumers through our cooperation with Xiaomi."

Founded in 2014, KEYi Tech is a consumer robotics company that has integrated an industrial control algorithm, control and perception technologies as well as AI into the robotic design of ClicBot. Based on a modular robotic system, KEYi Tech has built a platform through which users across different age groups and geographies can create and share content in a common community. ClicBot’s open and highly random gameplay delivers more fun as the player’s experience grows.

ClicBot was over 40 times oversubscribed on Kickstarter when it was launched on the platform in 2020, raising some US$900,000 from 1,678 backers from more than 80 countries and regions. In March 2021, ClicBot was named by Forbes as "Best Coding Robot" among its Top Ten Educational Robots of the Year. ClicBot, now with over 10,000 users worldwide, recently has been made available in China through an online and offline simultaneous direct sale model. As a next step, KEYi Tech plans to expand sales of ClicBot in the market by upgrading the robot and establishing relationships with more domestic retailers.

"Unlike traditional consumer robots, ClicBot was designed and built based on the concept of creating a brand-new robot with various combinations of intelligent modules," added Mr. Yang. "By reconfiguring the modules, users can create over 10,000 robotics applications from several categories, among them, tools, cute pets and interactive games. ClicBot can be used as a toy as well as a platform through which the user can create content and learn from others."

In addition, ClicBot is an educational robot that delivers a two-level programming experience comprising action coding that is enabled by basic concatenation and codeless programming which is achieved by dragging graphics.

KEYi Tech has also created an intelligent ecological community for ClicBot based on various application scenarios. The community meets on a diversified platform where users from all over the world share, discuss and execute their ideas about robotics every day. The platform brings together content consumers, content creators and developers who facilitate the creation of innovative content and interactions between developers and players. Many members of the community say that it has been an unprecedented and thrilling experience. Users can view and directly download other players’ creations in this community. Some take the next step and become content creators.

ClicBot is easy to use and allows users to complete any combination of modules in under 3 minutes. In the ClicBot App playground, the robot is available in over 50 preset robotic configurations, enabling users to learn while playing. Users can also create advanced content based on their own ideas while interacting with and inspiring others in the community. ClicBot’s interactions with the community have helped build a Metaverse ecosystem where a large number of players can also become creators and developers, ultimately creating a full ecosystem. Furthermore, with the expansion of the user base and the accelerated evolution of content, players can create their own competitive barriers through content and data, similar to other games in the genre.