The Cloud River Urban Research Institute recently released the China Integrated City Index for 2019, the fourth year in a row since its initiation in 2016.

Jointly developed by Cloud River Urban Research Institute and the Development Planning Department of the National Development and Reform Commission, the index is a system that evaluates growth performance of 297 cities at prefecture level or above across the country.

It measures urban development in three dimensions: environment, society and economy. Under each dimension lies many indicators that support its sub-dimensions at different layers. All of its indicators are supported by 785 data sets, which come from statistical data, satellite remote sensing data, and internet data.

China Integrated City Index is a multi-modal index that analyzes and measures a city’s development through statistical resources of different fields.

Beijing has topped the comprehensive ranking for four consecutive years, and is followed by Shanghai and Shenzhen.

In the comprehensive ranking, Beijing, Shanghai, Shenzhen and Guangzhou have been topping the list for four consecutive years with an overwhelming lead. They have their own unique advantages: Beijing has unparalleled advantage in the social ranking, Shanghai tops the economic ranking, Shenzhen occupies the first place in the environmental ranking, and Guangzhou takes a leading role in all the three dimensions.

Chongqing has seen significant growth in the comprehensive ranking, surpassing Tianjin and Hangzhou as it moves to the 5th from the 7th in 2018. On the other hand, Tianjin has fallen from the 5th in the 2018 ranking to the 8th, largely due to its drop in the environmental ranking from 21st to 40th. Hangzhou, Chengdu and Wuhan have remained steady performance. 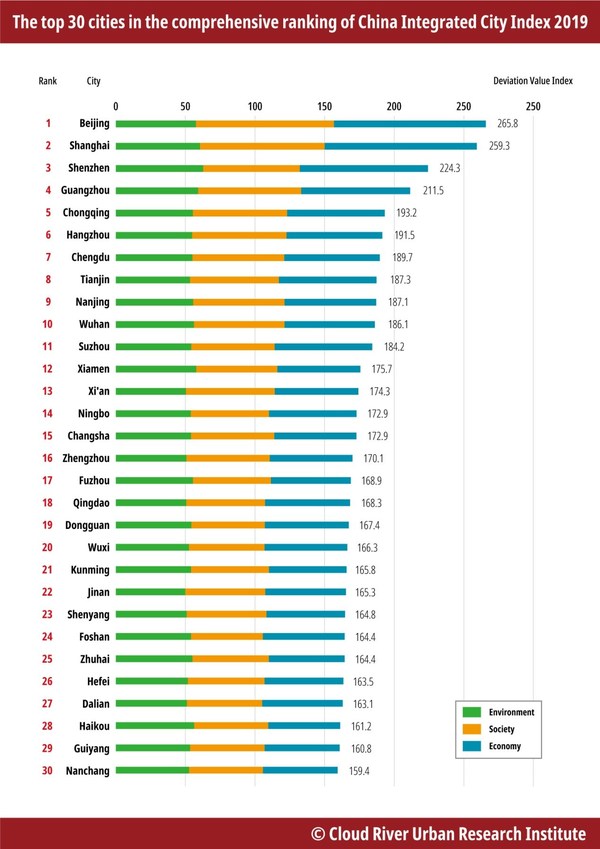 Shenzhen has been topping the environmental ranking for four years in a row. In the 2019 ranking, Shanghai and Guangzhou have climbed to 2nd and 3rd.

It is worth noting that CO2 emissions data is included in the China Integrated City Index 2019. Through years of efforts, the Cloud River Urban Research Institute has finally been able to calculate the CO2 emissions of each city through satellite data analysis and GIS analysis, which increased the accuracy and depth of its evaluations on the cities’ performance. Of course, incorporating CO2 emissions in the evaluation system definitely has an impact on the ranking.

Shenzhen has been topping the environmental ranking for four years in a row. Shanghai and Guangzhou, which took 8th and 7th, have climbed to 2nd and 3rd, while Beijing has dropped to 8th from 5th in the 2018 ranking.

It is worth noting that Linzhi, Qamdo and Rikaze from Tibet Autonomous Region have made to the top 10 cities in the ranking. As we have obtained more comprehensive data, Tibet is demonstrating more advantages in the environment dimension of the index.

Beijing and Shanghai have been taking the first and second place in the social ranking for four consecutive years, while Guangzhou has secured the third place for three years in a row.

Beijing and Shanghai have been taking the first and second place in the social ranking for four consecutive years, while Guangzhou has secured the third place for three years in a row.

The social dimension has long been Shenzhen’s weak points. But the city has seen significant increase as it rises from the 8th in 2018 to 4th in 2019. Nanjing also rises from the 10th to 8th in the newest ranking.

In the economic ranking, Shanghai has secured the top place, while Beijing and Shenzhen have taken the second and third places respectively for four years straight.

Over the years, the economic ranking has seen the least changes compared to other rankings, with Shanghai, Beijing, Shenzhen, Guangzhou, Tianjin and Suzhou occupying the top 6 for four consecutive years. Hangzhou has also secured the 8th in the past two years.

Chongqing and Nanjing take the 7th and 10th in the 2019 ranking, moving two and one places respectively from the previous year. Chengdu drops to the 9th, while Wuhan fails to secure the top 10, ranking only 11th.