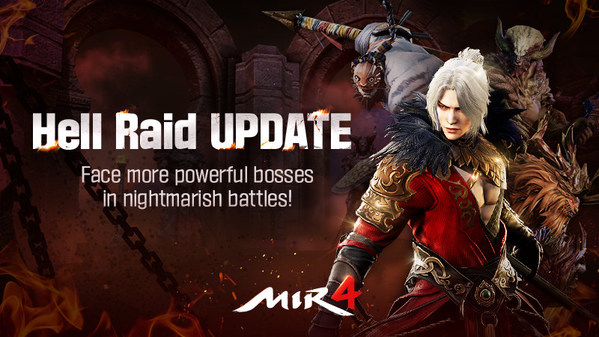 Hell Raid, a hard-mode combat content for level 90 or higher players, is much more difficult than the Boss Raid. Up to 15 players can participate to fight a powerful boss monster and followers.

More participants come with a higher likelihood of gaining higher benefits. If six or more players participate, there is a chance to acquire Tier 1 Epic Secondary Weapons and Earrings, Divine Oil of Blessing, and five kinds of Tributes used to enhance Mystique.

Hell Raid consists of multiple stages based on three monster levels – level 100, 120, and 140, and only players with a Hell Raid Ticket can enter.

Within 15 minutes, players can challenge a level 140 monster to grab the chance for further enhancement.

In addition, a Special Enhancement function was added where players can upgrade Epic or higher items such as Magic Stone, Spectrumite, Spirit Treasure and Mystical Piece. Dragonsteel, Darksteel and Enhancement Stones are needed to enhance items and players can use Oil of Blessing to increase the chance of enhancement.

Furthermore, a Transcend system has been added in which players can increase the stats of legendary spirits to level 4. When the level is notched up through the Transcend system, a slot for adding Spirit Treasure is added and unique stats are enhanced.

More details about <MIR4> can be found on its official website and community.