BEIJING, Jan. 3, 2022 /PRNewswire/ — Back in the 1980s, China allowed some people to get rich first to help others gradually achieve the national goal of common prosperity. Now common prosperity is the priority route to delivering happiness to all the people. 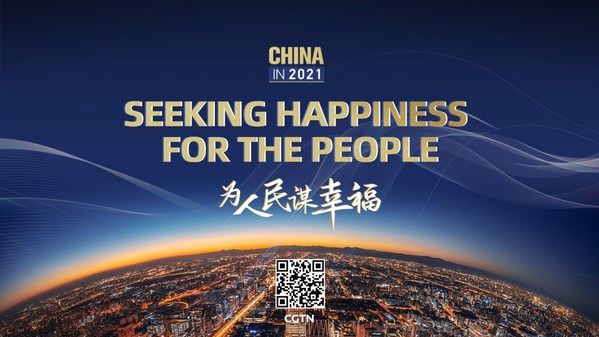 Seeking happiness for the people: China’s journey to common prosperity

In 2021, China realized the goal of building a moderately prosperous society in all respects (known as "Xiaokang" in Chinese) and got off to a good start during the 14th Five-Year Plan (FYP) period (2021-2025).

"To ensure that everyone leads a better life, we must never rest on what we have achieved, and there is still a long way to go," Chinese President Xi Jinping said in his New Year address on Friday.

In the first year of the 14th FYP period, China implemented the blueprint with a focus on the people-centered philosophy and prioritized efforts to foster a new development paradigm, strengthen the role of innovation, and advance the green transformation of the social and economic development.

The people-centered philosophy has been the key to China’s remarkable achievements in the past decades and will guide the country toward common prosperity. After eliminating extreme poverty across the country and accomplishing the "Xiaokang" goal, China embarked on a new journey toward socialist modernization and national rejuvenation.

"On the journey ahead, we must rely closely on the people to create history," Xi, also general secretary of the Communist Party of China (CPC) Central Committee, said in a speech at a gathering marking the centenary of the CPC on July 1. He vowed that the CPC would address the people’s concerns and promote common prosperity for all.

Chinese leaders have stressed the importance of creating and accumulating social wealth on the one hand, and preventing polarization on the other. First, all Chinese people need to work together to make the "cake" bigger and better; then efforts should be made to divide the "cake" well through proper institutional arrangements, according to a statement released after the Central Economic Work Conference in December.

While putting more emphasis on the domestic market, China also reiterated its pledge to open wider and share development opportunities with the world.

Putting innovation at the center of its modernization drive, China made various scientific and technological breakthroughs such as the launch of the crewed spaceship Shenzhou-13, the landing of the Mars probe Tianwen-1 on the red planet, advancement in the chipmaking industry and leaps in quantum computing.

As green development becomes a priority, China repeatedly stressed its pledges to peak carbon emissions by 2030 and achieve carbon neutrality by 2060, and released a series of policies to realize the goals.

In 2021, the country saw an odyssey of Asian elephants that caught global attention, pledged more investment to protect biodiversity, launched wind power and photovoltaic projects in desert areas, and reiterated its commitment to fighting climate change.

President Xi made 11 inspection tours around China during the past year, leaving his footprints in dozens of places. There were a number of key issues that Xi highlighted at these stops, which reflected some priority areas of the country’s development in the 14th FYP period and beyond.

From the 2022 Winter Olympics venues and remote villages to nature reserves and small companies, his visits demonstrated China’s commitment to advancing ecological progress and pursuing innovative, green and high-quality development.

"People," "ecology," "innovation," "high-quality," "security," "culture," "service," "education," "technology" and "rural areas" are among the top words and phrases Xi mentioned during his visits in 2021, according to CGTN analysis.

In each of his visits, Xi showed deep concern towards the people. He went to old revolutionary bases, ethnic minority regions, and places with poor infrastructure, fragile environmental conditions and victims of frequent natural disasters. He visited the poor, talked with local officials, inspected the conditions and reviewed the poverty alleviation work.

When visiting Guizhou Province in southwest China in February, he emphasized the importance of blazing a new path that prioritizes ecological conservation and green development.

He also highlighted protection of biodiversity on the Qinghai-Tibet Plateau and the ecological environment in the Yellow River basin and Saihanba – the once barren land located in north China’s Hebei Province that has turned into one of the world’s largest man-made forests – during his visits to Qinghai, Henan, Shandong and Hebei provinces and the Tibet Autonomous Region.

Amid an increasingly complex external environment, he called for efforts to deepen supply-side structural reform, build a new development paradigm and advance high-quality development on many occasions.