BEIJING, Oct. 21, 2022 /PRNewswire/ — China will first and foremost pursue high-quality development to build Chinese modernization, and its economy is expected to gain new strong growth impetus from the 20th National Congress of the Communist Party of China (CPC), according to the CPC congress. 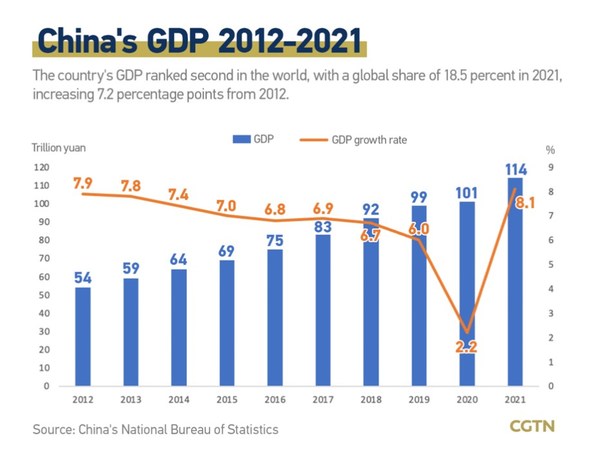 Some Western media outlets have made false accusations against the Chinese economy, from running reports about foreign capital leaving China, claiming that the country’s economic growth slowed sharply, to blaming it for rattling the global supply chain.

The reality is that the Chinese economy has transformed from quantitative to qualitative growth. It has seen a historic rise in economic strength and made great contributions to the world economy. It will be devoted to building a modernized and higher-standard open economy in the next five years.

From quantity to quality

China has promoted a new development pattern which is an open dual circulation involving both domestic and foreign markets, and it has implemented the innovation-driven development strategy and boosted emerging strategic industries.

China has joined the ranks of the world’s innovators. For example, it has invented the world’s first "hand-ripped" steel that is as thin as 0.02mm, making outstanding contributions to the upgrading of high-end manufacturing. It is widely used in foldable mobile phones, flexible displays and batteries.

The country has made the world’s largest tunnel boring machine (TBM), which can be used in building transportation mega projects. China-made TBMs have been exported to over 30 countries and regions, with the value of newly signed contracts increasing 58 percent year-on-year in the first six months.

The country also has the largest 5G network in the world, and its 5G users account for more than 80 percent of the world’s total. In 2021, the country’s industrial robots increased 44.9 percent year on year.

Economic data showed that the Chinese economy has secured positive growth with great potential and proven resilience over the past decade, which is still attractive to foreign capital, and that it has been a leading stabilizer of the global supply chain during the COVID-19 pandemic.

China’s GDP has grown from 54 trillion yuan ($7.5 trillion) in 2012 to 114 trillion yuan (about $15.8 trillion) in 2021 with a global share of 18.5 percent, up 7.2 percentage points. The country has remained the world’s second largest economy. Over the past decade, its average contribution to global economic growth exceeded 30 percent, ranking first across the world.

Consumption has become the main driver of the country’s economic growth, contributing 65.4 percent to its economic growth in 2021, 10 percentage points higher than in 2012. It has become the world’s largest online retail market for nine consecutive years, with a population of more than 1.4 billion and a middle-income group of about 400 million.

Foreign direct investment (FDI) into China has expanded from $111.7 billion in 2012 to $173.5 billion in 2021. Foreign investors have grasped new opportunities from China’s industrial and consumption upgrade, with FDI inflow into the service industry and high-tech industries up 8.7 percent and 33.6 percent respectively in the first eight months this year.

With solid industrial foundation and a series of policies to ensure supply, China’s foreign trade has maintained a relatively high growth, which has effectively alleviated the pressure on the global supply chain arising from the COVID-19 pandemic and the Russia–Ukraine conflict. The country’s foreign trade of goods went up 10.1 percent in the first eight months of this year.

Tasks for next five years

The next five years will be crucial for a good start of China’s modernization drive, and the CPC congress has set the main tasks: China will make breakthroughs in promoting high-quality economic development, and achieve greater self-reliance and strength in science and technology, with innovation at the heart of the drive.

The industrial system will be modernized, with measures to advance new industrialization, and boost China’s strength in manufacturing, product quality, aerospace, transportation, cyberspace, and digital development, according to the CPC congress. China will also make new strides in reform and opening up, and put in place new systems for a higher-standard open economy.

The CPC aims to basically realize socialist modernization from 2020 through 2035 and build China into a great modern socialist country that is prosperous, strong, democratic, culturally advanced, harmonious, and beautiful from 2035 through the middle of this century.